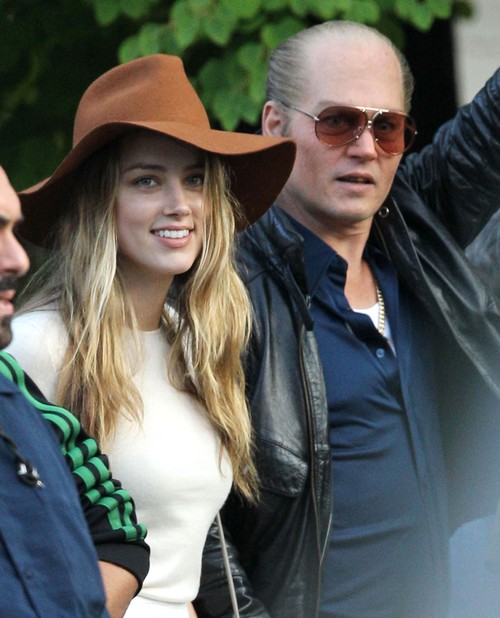 Amber Heard and Johnny Depp have always been a weird couple, but their incredibly speedy nuptials certainly raised more than a few eyebrows. For one, Johnny was with the mother of his children, Vanessa Paradis, for more than a decade but they never got married. Yet he’s with Amber for two years, and they get engaged?

Well, there were bound to be hiccups along the way, and we might have already hit some. According to the National Enquirer, Johnny is getting cold feet regarding his impending wedding to Amber. And the biggest reason for his hesitation? Well, his kids, Lily-Rose and Jack, really, really don’t like Amber. Sure, they’re spending time with her and going to events with her, but they’re kids – it’s not like they have a choice.

As the Enquirer’s sources explain, “Johnny wants his kids to be front and center when he and Amber tie the knot, but it seems they just can’t warm to her. Lily-Rose and Jack are very close to their mother and they blame Amber for wrecking their family.”

No duh. What kid would ‘warm’ to the person that homewrecked their family? Yes, that person is joining the family now, but it’s not like she’s replacing their mother. They can single-handedly thank Amber for ruining their father’s relationship with their mother, so I doubt they’ll be jumping with joy for the wedding to come faster. As such, of course Johnny’s going to think twice about rushing down the aisle. He claims he wants more kids, but shouldn’t he concentrate on making his existing kids happy? And if his marriage will make them that unhappy, of course he’s going to hesitate before doing it.

What do you guys think? Will Johnny and Amber go ahead with the marriage, or will Johnny call off the wedding completely? Let us know your thoughts in the comments below.