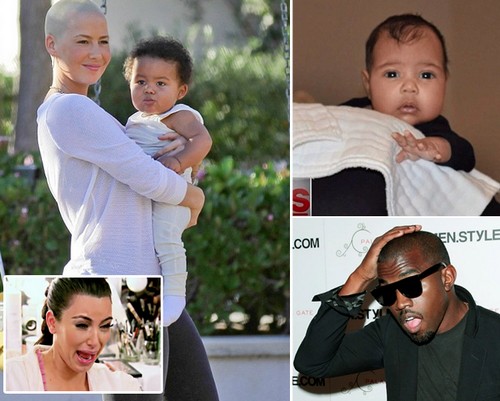 Kanye West is royalty… In his own mind of course. It seems that in the true spirit of royalty he has been sowing his royal oats in some familiar ground. Amber Rose, Kanye West’s ex, is thought to be living in urban bliss with musician and marijuana enthusiast Wiz Kahilifa. The two seem to be happy and in love as they welcomed their son Sebastian “Bash” into the world nearly a a year ago.

There are however rumblings that Amber just can’t stay away from Kanye West and that her son might even be little North West’s half brother. If any of this were true it wouldn’t surprise me. Amber did say that Kanye cheated on her with Kim Kardashian while they were together. She even claimed she found nude pics of Kim on Kanye’s cell phone. Myla Sininaj, Kris Humphries’s other ex full time embarrassment even admitted to making Kanye copies of the key cards to Kim’s suite when she worked the front desk at hotels, most likely during the time Kanye was with Amber.

If Amber did hook up with Kanye while he was with Kim, Kim would be getting her just desserts. Strippers are known for many things but forgiveness and maturity are not among them. Kanye was pretty much all Amber had since he’s the one who liberated her from her career of tweaking for one dollar bills, he’s the one who helped get Amber a job that required direct deposit Instead of a snug fitting g-string to tuck her singles into. Kim on the other hand has more than she could ever need but still felt the need to erect her gigantic rear end between Amber and Kanye. if Amber were the grudge holding type this would be the prefect way to get back at Kim, especially after all the hard work these two do trying to convince everyone they are soul mates. Loyalty and fidelity in a relationship mean nothing to these people, especially the Kardashians this is evidenced by Kris Jenner’s decades long whore-a-thon. Kim was just doing as she’s been taught all these years but what goes around certainly does come around eventually.

I truly hope that Amber hasn’t waded back into that pool of insanity and STD’s. Wiz may look like a voo doo doll but he really seems to love Amber, and ex strippers need all the love they can get. Kim and Kanye deserve each other and will most likely destroy each other as well. We can only hope that it will occur swiftly then the world will be rid of their narcissistic elitism and minors in chiropractor’s offices across the country can breathe easy.