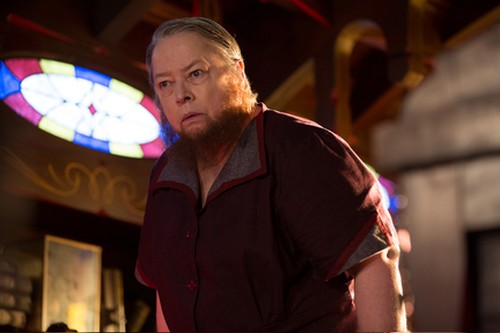 On the last episode, Elsa unveiled a dangerous new act. Stanley put pressure on Maggie to murder Jimmy. Paul indulged in a secret romance. Did you watch the last episode? If you missed it, we have a full and detailed recap right here for you.

On tonight’s show as per the FX synopsis, “the women of the Freak Show rally against Dell after his latest act of violence. A strange encounter with Dandy raises Jimmy’s suspicion about the clown murders.”

Jimmy rehearses the song he wants to perform and Elsa doesn’t like it, but he says that’s the song he’s going to do and there’s nothing she can do. She tells him to watch who he’s talking to.  “I know who I’m talking to,” he says. “A liar.”

He then says he knows what she did with the twins and he knows she took them.  The twins pipe up and say that Elsa actually helped them and that want to come back if she will have them, and she says of course.

Dandy and Dell almost fight outside when Maggie breaks it up and they go inside to talk alone, where Dandy proceeds to blackmail Dell. “You came to make a deal, right?” Dell says. “Talk.” “I need one of your freaks dead,” he responds. He tells him to bring the body to a barn a coupler miles west of there and that he has a day.

Jimmy tells Maggie that the twins changing their story is making him uncomfortable, so Maggie suggests leaving right now, but he says that doesn’t feel right.  She thinks he’s stalling on running off with her, and he says that isn’t true and he just needs a few days to get things in order, which she doesn’t believe.

Dell comes in the night and tries to assault Amazon Eve and then they get in a brawl, which she ends by hitting him with a pot and throwing him out on the ground. When she comes back to Ethel and Jimmy, Ethel immediately plots to invade his tent and Jimmy protests. Ethel gives him a speech about his naivete and how he needs to be punished for what he did. Jimmy agrees and says it will be taken care of.  “You handle him,” she says, “or we will.”

Elsa tries to get the twins to go to Hollywood, but they say they want 20% off the top upfront, which they increase to 50%, and the money she got when she sold them. “This is blackmail,” Elsa says.

Jimmy tells Dell about the lynch mob that is now after him, and he says she is crazy and he just wanted her to participate in an act.  “She can say whatever she wants,” he says. “Look at her, look at me.”  Jimmy says it doesn’t matter what the truth is and he won’t miss him if he goes but he needs to deal with it.

Outside, Jimmy vomits in a trash can and Dell almost hits him in the back of the head with a brick before Jimmy confronts him. “I know who you are,” he says, saying just the way his mom hates him tells him everything he needs to know. He also reveals he knows everything about his family. He compels him to admit that he is Jimmy’s father, and he admits it. “Yes son, it’s true,” he says. They hug and go home.

In the morning, they walk through the camp drunk and singing and Elsa tells them to quiet down. Desiree emerges and tells Jimmy not to let Dell influence him, and Dell bursts out repeating that Jimmy is his son.  Elsa quips about how it must have taken a lot of courage finally to claim his progeny after over 20 years.

Dell still has to deal with Stanley’s blackmail, which he is reminded of when he tucks Jimmy into bed and emerges only to find him sitting there, waiting.

Bette undergoes a makeover with make-up and blonde hair. Dot refuses to get a makeover.  Bette says they’re the perfect before and after picture, and they could make it an act called The Metamorphosis, where Dot is transformed into a beauty. Elsa says to let her know if there’s anything else they need, surreptitiously handing Dot a note.  Dot reads the note, which asks why she wants the money, saying she can just tell Elsa her heart’s desire and Elsa can help her. “We are in this together,” she writes.  Dot’s return note says she wants Elsa to help her find a specific doctor who can perform surgery to separate her and her twin. She says her secret is safe if she can get this done.

Stanley and Elsa discuss the situation with the twins being back and hellbent on destroying her. She tells him about the surgeon and says she wants  Stanley to locate the doctor and she can send the twins to Chicago, where she will be off her back forever.  However, Stanley suggests they put them out of their misery and kill them.

Dell gives Ma Petite a dress as a present and then suffocates her to death in order to pay the blackmail, and she is shown in a museum in a tank.