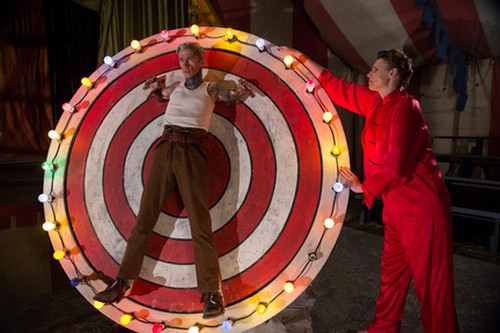 On the last episode Stanley and Maggie hatched a plan to murder the Freaks. Gloria hid the evidence of Dandy’s gruesome new hobby. A health scare revealed Desiree may not be the oddity she once thought. Did you watch the last episode? If you missed it, we have a full and detailed recap right here for you.

On tonight’s show as per the FX synopsis, “Elsa unveils a dangerous new act. Stanley puts pressure on Maggie to murder Jimmy. Paul indulges in a secret romance.”

Elsa and her crew roll a large bullseye into the big tent. She talks about fate and how everyone’s just spinning on the giant wheel; she, however, has learned how to stay off it and become the master of her own fate. Ethel comes in and asks if she’s planning on working this act into the show. Elsa says no. She says she’s planning on incorporating it into her new TV gig. She’s still under the delusion that Stanley is telling the truth.

It’s Elsa’s birthday week. Everyone thinks that the twins have left the show — but we all know that the twins were really handed over to the Motts by Elsa herself.

Gloria and Dandy are eating dinner. Gloria says that she’s gotten Dandy a present: condoms. She thinks he might need them since the twins are in his presence now, but Dandy assures his mother that he would never “violate” them, as he loves them. He says he never thought he could feel love like this before. Gloria clearly doesn’t want him seeing them because it will do harm to their social status. Dandy gets up, however, and opposes his mother. He tells her that he plans on marrying the twins and that the three of them will be together forever.

Elsa’s sitting on her throne and welcoming all the gifts from her stars. Everyone’s feeling kinda glum that the twins have left them. Jimmy asks if they’d said anything before leaving. Elsa grows furious and demands everyone to have fun — or else she’ll put one of the freaks on her bullseye wheel.

Paul the Illustrated Seal and Elsa have a secret romance going on. Elsa doesn’t want anyone to know.

Paul leaves Elsa’s tent and finds himself in the bed of another woman — the candy striper who’d found her way to the freakshow. Paul says he’s in love with her and that he wants her to know him as a man before they make love again.

Bette is falling in love with Dandy. She confesses this in her diary entries. Meanwhile, Dot is unsure what Dandy is up to and is feeling trapped. She writes, “We haven’t been beaten or bound by chains, but I have to wonder what dark intentions await.”

Dandy shows the twins a story in the newspaper about a successful surgery that’s been performed involving the separation of Siamese twins. Dot has an idea: She will use Dandy for his money. It seems as if she will play along with this whole “falling in love” act if it means that she has a shot at getting separated from her sister, Bette.

She has a fantasy vision where she meets with Jimmy Darling, with whom she’s in love.

Paul shows up at the drugstore to purchase some perfume for his new love; however, before he can purchase the item, Dandy throws his stuff on the counter. Paul says that he remembers Dandy from when he and his mother came to see the freakshow. Paul also remembers that Dandy tried to buy the twins. Paul notices Dandy’s items on the counter; there are two of everything. Paul seems to be putting two and two together. Before he can interact any further, Dandy tells the storeowner that Paul is bothering him. The storeowner throws Paul out of his store. Paul spits on the window before walking away down the street.

Jimmy and Paul are cleaning up after the night’s show. Paul tells Jimmy about what he saw at the drugstore. Jimmy gets mad that Paul’s accusing Elsa of getting rid of the twins. Jimmy slaps Paul. Before Paul walks off calmly, he says that, from where he’s standing, all he can see is a “jealous broad who’s willing to get rid of anyone in order to get one lost shot at it.”

Dot reads the recent article about the Siamese twin surgery. One of the twins died. Bette says that she wishes her sister would understand that they’ll always be together and that science shouldn’t work to undo the will of God.

Dandy says that he’s noticed how secretive Dot is. Dandy says that they should each tell a secret. He goes first. He says that he actually killed Twisty the Clown; he says that Lobster Boy didn’t. Dot, who’s in love with Jimmy, doesn’t believe Dandy and refuses to play his secret-telling game.

Dandy blows up and storms out of the room.

Maggie Esmerelda meets with Stanley. Stanley needs something to sell to the museum — he needs a payday. He wants to kill Jimmy for his “lobster hands,” but Maggie puts a stop to that real quick. She says she has a better idea, something that won’t leave behind any evidence. Next, we see Stanley and Maggie drowning Ma Petite in a large glass jar.

We’re taken back to the present. The scene wasn’t real. Stanley says that Maggie’s rutheless. Maggi says, “I’m gonna have to be.”

Elsa’s in her tent singing to Paul. When she’s finished, Paul begins to leave, but she asks him for a goodnight kiss. She smells perfume on him and asks who he’s been screwing. Paul confronts her about the twins. She blows up and asks him to wake everyone up.

In the big tent, Elsa continues to blow up and demands everyone trust her. Ethel asks her how, how they can prove their trust to her. “The Wheel!” Elsa says. She wants one freak to get on her wheel so she can hurl knives at them. Jimmy, at first, volunteers. But then Paul steps up and says that it should be he who takes his turn on the wheel.

Paul is strapped in, the wheel is spun. Elsa hurls two knives at the wheel. The knives miss Paul. The third knife, however, lands in his abdomen — a move that Elsa clearly planned. “It was an accident,” she shouts, but we all know the truth.

Ma Petite is sleeping in her bed. Maggie comes for her and picks her up. Ma Petite comes willingly. Maggie takes Ma Petite to a nearby barn and says that they’re going to play a game. She puts her in a glass jar. Poor Ma Petite has no idea what’s going on.

Meanwhile, Elsa has Paul, severely injured, in her tent. She says that she wouldn’t even shed a tear if he died, which is about to happen since she never called the ambulance. Paul’s lover shows up and is distraught that she could lose her love.

The next morning, Ethel is frosting Elsa’s birthday cake. Jimmy comes in, a bit disheveled, and asks his mother what on earth she’s doing. “Why are you frosting a cake?” he asks. “Paul could die!”

He reveals some of his concerns regarding Elsa’s honesty and says that Paul also had his concerns. Ethel only wants to see the good in Elsa.

Amazon Eve comes running to find Jimmy. She can’t find Ma Petite anywhere. Just when they’re about to go search for her, Maggie returns to camp holding Ma Petite in her arms. Turns out she never went through with the plan.

Maggie talks with Jimmy and asks him to run away with her. He agrees and goes to get a bag.

Maggie returns to her tent only to be greeted by a furious Stanley. He wants his freak for the museum. He says they’re going to go through with their original plan and get Lobster Boy’s claws. He orders Maggie to lure Jimmy to the shed.

Dandy’s distraught after reading Dot’s diary. He says his heart is, once again, dry like a desert. He says he was never destined to feel love. He says a desert knows no mercy and that he must accept this emptiness as a blessing not a curse. He tells Gloria that he knows why he was put on this earth: his purpose is to bring death.

As he leaves his room with a dagger in his belt, Gloria watches him walk away.

The doorbell rings. It’s Jimmy. Gloria answers the door. Jimmy says that he’s here to see Dandy. Dandy tells his mother to let him in. “He’s here for the girls,” he says.

Ethel has a piece of cake for Elsa. Nobody’s sitting at the table with her. Elsa tells Ethel that she’s like the sister she never met and wants to know why nobody stands by her after all she’s done for them. Ethel tells her that everyone’s faith in her has been shaken, especially after the twins’ mysterious disappearance and now the accident with Paul.

Ethel lights the candle for Elsa to blow out. Ethel tells Elsa that if she ever finds out she’s been lied to, then she’ll kill her with her own bare hands.

Elsa blows out her candle and makes a wish: “I just want to be loved,” she says in her mind. The screen goes black.