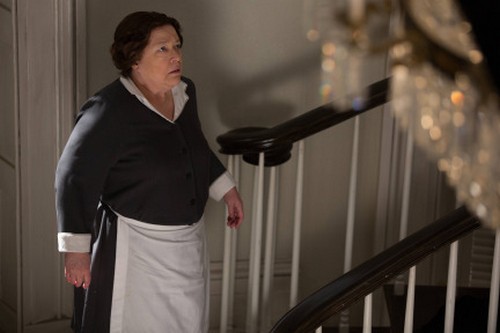 Our favorite creepy drama AMERICAN HORROR STORY continues tonight with another new episode called “Protect the Coven”. On tonight’s show, Cordelia makes a desperate sacrifice to protect the Coven. Did you watch last week’s episode? We did, and we recapped it right here for you!

On the last episode, in the aftermath of her people’s slaughter, Marie Laveau sought a truce with Fiona and the Coven… but her dark master, Papa Legba, demanded his annual due. The next morning, Cordelia was horrified when she finally learned that Hank was a Witch Hunter… and Marie confessed hiring him to kill the Coven. Fiona was forgiving of Marie on the grounds that she was doing what she had to do but was furious with Cordelia for having married Hank and letting him turn her against her own mother.

On tonight’s show, Fiona and Laveau have a deadly face off with The Corporation and Cordelia makes a desperate sacrifice to protect the Coven.

Tonight’s episode is going to be another spooky one and you won’t want to miss it. So be sure to tune in for our live coverage of FX’s American Horror Story – tonight at 10PM EST! While you wait for our recap, hit the comments and let us know if you are excited about the season 3 episode 11 of American Horror Story. While you wait for the recap, check out a sneak peek of tonight’s episode below!

The show opens up with a Delphine flashback. She’s mad because she had to leave Paris, and she and her daughters are clearly at odds. The year is 1830. She tries to adjust to the life of New Orleans but she can’t stand it, especially the grunt work that she’s forced to do, like prepare a meal. Delphine tells her daughter to butcher a chicken for dinner but her daughter refuses, so Delphine does it. “How hard can it be to cut the head off of a chicken?” she says.

Blood spurts out of the chicken. Her obsession with blood begins. Later, one of her servants cuts his leg. She bends down to help him but is enamored by the blood, all over her fingers; she knocks him out and ties him up, letting the blood drip down every inch of him. “I think I’m going to like it here,” she says. This flashback obviously shows the grotesque origins of her torturous methods.

Fiona and the coven bury and say goodbye to Nan. Cordelia says that she needs to do something before one more of her girls dies. Queenie shows up and everyone’s surprised to see her. She’s also put Delphine back together; Queenie has Delphine on a leash and drags her around. They all leave the cemetery — the one where Madison “got rid of” Misty Day.

Hank’s father mourns his son’s death and is quite sure that the witches cast a spell over his company to bring them negative energy. He wants to make a deal with them.

Fiona’s on the phone with someone. It seems to be the company. She says that they’ll only meet them in New Orleans. After she gets off the phone, Marie says, “You know they’re gonna try and kill us, right?” Fiona says, “Oh, I’m counting on it.”

Madison uses the toilet. In walks Delphine, who’s become everyone’s maid. Delphine tells Madison to flush “her dirt” but M orders Delphine to do it. She grins evilly. Later that night, Delphine serves the witches shit soup — and they all love it (disgusting!).

Cordelia tries to regain her sight by drinking a green smoothie.

A gardener comes in with a bleeding hand and Delphine is immediately fascinated. She tells Cordelia that she’ll tend to the guy and takes him upstairs where she ties him up and tortures him.

Zoe does a spell over the bathtub where Nan died and the tub water reveals that Nan drowned at the hand of both Marie and Fiona. Zoe wonders why in the world they would’ve killed her. Madison comes into the bathroom, clearly mad that Kyle’s spending so much time with Zoe and not her. She’s gotten jealous. They all head to the bedroom and Madison makes a move on Kyle. He pushes her to the ground and says that he loves Zoe. Madison throws a psychokinetic fit, causing the room to rumble. Myrtle Snow runs upstairs and scoffs at Madison, telling her that she’s the “worst kind of Hollywood cliche.”

Madison’s not having any of Myrtle’s sass and tells her that when she becomes the next Supreme she’s going to drag this coven out of the dark ages. “And, as for you, Ken doll . . . putting you together was fun, but taking you apart is going to be even better.” She storms out of the room, cigarette in hand.

Fiona has a chat with the Axeman, who tells her that they have to find out who this young Supreme is and end her before it’s too late.

Delphine has killed the gardener and Spalding appears. He reveals to her that he’s a ghost and tries to convince her that she should try to kill Marie so she might have a chance to finally rest and end her cursed immortality. She’s intrigued by this idea. Spalding says that Marie’s immortality is linked to magic and, therefore, she can die by magic. Spalding says that he can help Delphine in her quest but first he’ll need something from her. He wants her to retrieve an item, out in the world, and it won’t come cheap.

Queenie is going through the closet to her old room when Cordelia walks in wanting to talk. She tells her that she’s glad she’s back, but Queenie is feeling both betrayed and mad. Cordelia wants her to know that it was she who decided to leave in the first place and go to the Voodoo side, but Queenie is irritable about the current state of things — especially how quickly everything has changed (e.g. more deaths, Marie’s current “alliance,” etc.).

Cordelia wants to know how in the world Queenie survived. Queenie says she must’ve developed some new powers because she shot herself right in the head. Plus, she survived being shot by a blessed, silver bullet. “I’m starting to think I might be the new Supreme,” she says, somewhat offhandedly.

“My eyes are open now, Queenie,” Cordelia says. She’s going to do everything in her power to protect what’s left of this coven. Queenie’s not having much of this talk, however, and says, “You’re weaker than you’ve ever been. You might want to take a nice long vacation and let someone else run things for a while. Now get out.”

Meanwhile, Cordelia begins to work on a potion. She begins crying. She mashes up some plant matter, dips her fingers in it, and circles her eyes with it. She then proceeds to poke both of her eyes with a pair of small garden clippers. She’s trying to retrieve her “sight.”

Fiona comes running in the house asking if its true. Myrtle says that it is true and that she’s done it because she’s a hero, something she [Fiona] will never be.

Meanwhile, Delphine returns with the item that Spalding wanted. It’s a vintage porcelain doll. He gives her the “potion” that will render Marie into a mortal state. He simply hands her a carton of Benadryl — but Delphine has no clue that he’s given her a simple allergy medication.

Myrtle is playing her Theremin instrument and hands Zoe a small item. It’s a small piece of jewelry of great value and she instructs her to sell it — in case of emergency. She wants Zoe and Kyle to leave this coven. She says that if she stays here she’s in grave danger. Zoe objects at first but after Myrtle insists, Zoe sort of agrees, takes the two tickets Myrtle’s purchased for her, and they embrace.

The witch hunters arrive and walk into a conference room with a large table. Fiona and Marie walk  into the conference room. “What, no weapons?” Hank’s father asks. Fiona laughs. “I took down your entire company with about as much effort as it takes me to mix myself a Rob Roy. And Marie? Marie is immortal for Christ’s sake. And you think we’re worried about guns?”

They negotiate their terms. The company passes over a 100 year Truce, but Marie and Fiona don’t really like that plan. Fiona says that they’ll suspend their witch hunting forever or they can all just die. The Company laughs off the witchs’ terms. The Axeman, disguised as a bartender, axes all the hunters down. They save Hank’s father for last. Fiona chops his neck. They’re all dead. Really dead.

Back at home, Fiona and Marie have a celebratory drink. Delphine put the Benadryl in her drink. After Fiona leaves, Delphine goes to Marie’s room and stabs her with a knife but she doesn’t die. She can’t die. Marie chases Delphine into the hallway. Spalding smacks Marie with one of his porcelain dolls and she tumbles down the stairs unconscious. Spalding instructs Delphine to bury Marie so she can’t get free ever again.

Zoe and Kyle prepare to skip town, but Kyle admits that he’s afraid. Kyle says that he’s afraid of himself. He says he has these feelings inside him that he can’t control and he doesn’t want to hurt Zoe. Not ever. He eventually sees it Zoe’s way and, together, they run to catch a bus headed for Orlando.