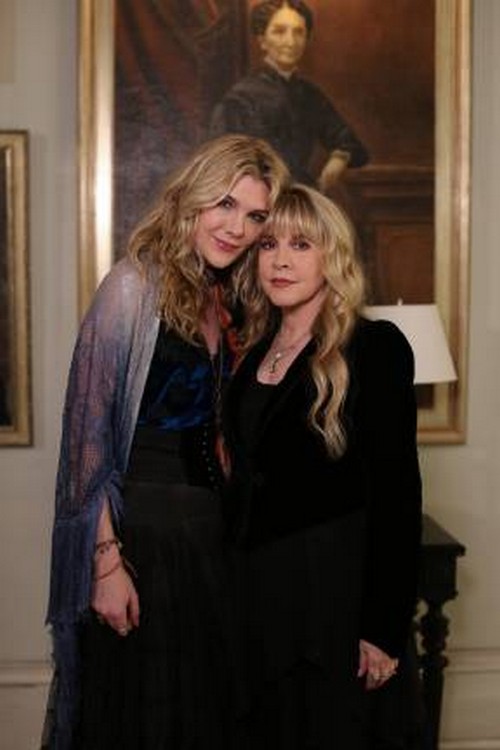 Our favorite creepy drama AMERICAN HORROR STORY continues tonight with another new episode called “The Magical Delights of Stevie Nicks”. On tonight’s show, Fiona attempts to out the new Supreme with a visit from Stevie Nicks. Did you watch last week’s episode? We did, and we recapped it right here for you!

On the last episode before the break, the academy witches tried to fight back against the witch-hunter who tried to take them out. Cordelia’s attacker was revealed and Fiona looked to form an alliance with Marie Laveau. Nan also learned a disturbing truth about Luke’s past.

On tonight’s episode, in the aftermath of her people’s slaughter, Marie Laveau seeks a truce with Fiona and the Coven… but her dark master, Papa Legba, demands his annual due. The next morning, Cordelia is horrified when she finally learns that Hank is a Witch Hunter… and Marie confesses hiring him to kill the Coven. Fiona is forgiving of Marie on the grounds that she was doing what she had to do, but is furious with Cordelia for having married Hank and letting him turn her against her own mother.

Tonight’s episode is going to be another spooky one and you won’t want to miss it. So be sure to tune in for our live coverage of FX’s American Horror Story – tonight at 10PM EST! While you wait for our recap, hit the comments and let us know if you are excited about the season 3 episode 10 of American Horror Story. While you wait for the recap, check out a sneak peek of tonight’s episode below!

The show opens up with Fiona pouring Marie some tea with liquor. Marie says that she’s happy to have found an equal and, after more than three hundred years of living, she’s truly touched by Fiona’s unexpected kindness — especially after having lost all her voodoo followers. As she drifts off to sleep, she’s visited by a strange entity in the form of a man. Papa Legba. He says it’s time for her to pay his price — the price she must pay once a year in order to upkeep the bargain she made with him so long ago.

Next, we see Marie walking through a dark hospital corridor. Babies are crying. She bewitches a nurse with a strange powder to open the nursery doors. Marie picks up a baby and walks out of the institution; she’s met by two cops who tell her that she won’t be able to leave with that baby. “I need this baby,” she tells them and, with some strange magic, she tells the two cops to shoot each other. The baby starts crying and she walks off into the night.

We’re not certain yet, but Papa Legba probably requires Marie to sacrifice a baby once a year in exchange for her immortality.

Marie, Fiona, and Cordelia watch the news and see Hank walking out of the hair salon. Cordelia says that it’s all her fault that he attacked the witches at the salon, but Marie finally comes clean and tells everyone that it was actually she who hired him in the first place — not to kill her people, obviously, but she’s the one who brought him to town.

Cordelia goes off on Marie, but Fiona steps in and slaps Cordelia. Fiona is furious that Cordelia could’ve been so blind by “love” and willfully allowed a viper to enter their sacred house. Fiona says that, despite Hank’s solo actions, he wasn’t working alone. Witch hunters never act alone. They belong to a sacred order of men whose sole purpose it is to rid the world of witches, black or white. She says they need to find the “hive” of witch hunters if their race is to survive.

Misty is looking at herself in the mirror. Fiona comes in and smokes a cigarette and begins telling Misty about the magic of the Supreme — and the power that comes along with it. Fiona says that she’d like to introduce her to an old friend, a White Witch. It’s Stevie Nicks. When Misty is introduced to her, she faints.

Nan, Madison, and Zoe come home to Stevie Nicks playing a song. Fiona admits to Madison that she feels Misty is the next Supreme. “What about the seven wonders?” Madison asks. Fiona says, “I have no doubt she’ll pass every one of them.”

Madison is still hellbent on becoming the next Supreme. Zoe says that she can’t be the next Supreme because of her heart murmur. Nan comes over and listens to Madison’s heart, but hears that her heart murmur is now gone. Apparently, her trip to the afterlife cured her of her ills. So perhaps she’s back in the running again? Now, Madison wants to challenge Misty to a Seven Wonders duel — to see who’s worthy of the title.

Cordelia locates the webpage of the Delphi Trust, run by Hank’s dad, specializing in private equity. Fiona says they need to be smart about this, and they proceed to concoct a weird ritual to lure them out of their depths and infiltrate the system. Cordelia wants to help but Fiona yells in her face, saying she’s worthless.

Fiona’s spell worked. The FBI is currently infiltrating the Delphi Trust. Apparently, the spell was some form of curse. After the spell, Fiona collapses. Marie wakes her up and says she’s not ready to say goodbye yet, that they still have work to do. Fiona pleads for her to teach the secret of immortality, but Marie says she can’t. She sold her soul to Papa Legba, who requires her to sacrifice a baby once a year. Marie even had to sacrifice her own child to the spirit.

Madison and Misty go out on the town and they find themselves in the center of a parade. Madison tries to get in her head about being a Supreme — and how Fiona and Stevie have both just used her. Madison takes Misty to the cemetery to prove that she’s just as powerful as her. Madison waves her hand and supposedly “raises” a corpse. He walks out of his casket. Misty looks on at the man as Madison urges Misty to stop being an imitation of some “other” witch– Stevie. As Misty stands over the casket, Madison knocks her out with a brick. When the gravediggers return, they proceed to bury Misty, knocked out cold.

After having found out that Luke died, Zoe and Nan go to visit Luke’s mother. Luke’s mother tries to put on an act, but Nan, a mindreader, isn’t having any of it. She turns violent and, using her new powers of mind CONTROL, compels his mother to down a gallon of bleach. Zoe isn’t strong enough to thwart Nan’s powerful magic, fueled by a deep rage.

Meanwhile, Cordelia is in her greenhouse listening to Myrtle Snow’s strange instruments. Cordelia has a breakdown, going off about how she doesn’t belong anywhere and is a failure at all she’s every done.

At Delphi, hank’s father suspects something “unnatural” is behind his company’s sudden downfall.

Fiona attempts to conjure Papa Legba. She wants to make a deal with him for immortality. She leaves him an offering of cocaine and successfully conjures him. She says she doesn’t want to die. He says, “I don’t give a shit about your title. I only give a shit about your soul.” She says fine, take it, and she agrees to his terms — whatever it takes. He goes to kiss her, to steal her soul, but then he pulls away from her. “The deal’s off. You have nothing to give. You have no soul.”

Fiona is left saddened and more broken than ever. The Axeman arrives and tells her that she’ll just have to find the young girl draining her of her powers. “Haven’t you heard? I don’t have a soul. I’ll kill them all.”

Nan and Madison talk about what just happened. Nan says she hears something and gets up to investigate. She looks through the house and discovers the baby Marie stole. Nan grabs the crying baby and holds him/her in her arms. Marie storms in an wonders how Nan could’ve heard through the charmed cabinet, but then she realizes that she’s the clairvoyant. Next, Fiona comes in and orders Nan to leave and to give the baby back to Marie. Marie tells Fiona that the baby is for Papa Legba, that his “terms” get worse and worse every year. Fiona admits that she and Papa couldn’t come to terms of their own and, sadly, she’s still mortal.

“Maybe we could kill two birds with one stone,” Fiona says, after realizing that Pap wants an innocent soul to uphold Marie’s end of the bargain.

Fiona listens to Stevie play a song on the piano and cries, no doubt thinking about all she’s done.

What’s next for these witches?