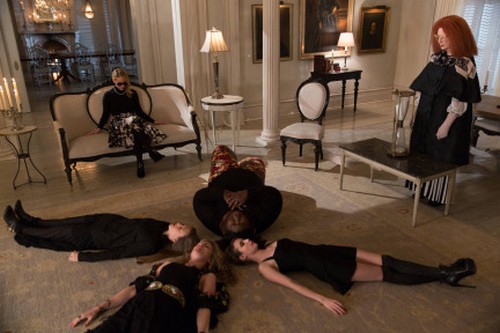 Our favorite creepy drama AMERICAN HORROR STORY continues tonight with the season 3 finale called “The Seven Wonders.” On tonight’s show,  a new Supreme rises. Did you watch last week’s episode? We did, and we recapped it right here for you!

On the last episode a dying Fiona became even more desperate to find and destroy the new Supreme but also wondered if she should give it up and just enjoy her final days. As the time approached for the new Supreme to demonstrate the Seven Wonders, dangerous things began happening, including the manifestation of many new powers — which proved many of the girls just might be worthy enough for the new title.

On tonight’s show, the next supreme will be crowned and, with Fiona Goode out of the picture, it’s only a matter of time before the new Supreme asserts her power. Only a witch who masters all seven of the magical powers will be granted the Supreme-hood. So who’s it going to be?

Tonight’s episode is going to be another spooky one and you won’t want to miss it. So be sure to tune in for our live coverage of FX’s American Horror Story – tonight at 10PM EST! While you wait for our recap, hit the comments and let us know if you are excited about the season 3 finale of American Horror Story. While you wait for the recap, check out a sneak peek of tonight’s episode below!

The show opens with Stevie Nicks singing about the Seven Wonders. There’s a montage of all the Supreme hopefuls doing their day-to-day activities and preparing for the Seven Wonders tasks. It’s actually an incredible opening for the finale episode. The montage ends with the Queenie, Zoe, Madison, and Misty standing on the staircase. Stevie says, “Good luck, girls,” and walks out of the house. The door slams shut.

Myrtle Snow prepares a “Last Supper” for the girls before one of them assumes the Supremacy. Cordelia says that they are embarking upon something that’s never been done before: Determining the new Supreme without the help of the previous Supreme.

The Seven Wonders trial begins. They begin with telekinesis. Kyle lights candles. The task is to move the candle stick. Misty’s up first. She successfully completes the task. Queenie, Madison, and Zoe complete it next. Cordelia says, “You either are the Supreme or you aren’t.” It’s not about wanting the title; it’s whether you were born to hold it.

The next wonder: Concilium. Mind control. Misty, Queenie, Madison, and Zoe all complete the task. Zoe and Madison get into a fight over Kyle.

The next task: Descending into the underworld. Myrtle says that getting into Hell isn’t the hard part. It’s getting back that’s the challenge. Myrtle says that if they’re not back by sun up, their souls will be lost forever.

Madison and Queenie are the first individuals to arrive back to the land of living. Madison is third to arrive. Misty isn’t waking up. We descend into her personal hell. She’s in a biology class where she’s resurrecting dead test frogs. The teacher makes her slice open the frog. Then she brings it back to life. She’s subjected to this torture over and over and over again.

In the land of the living, Cordelia cradles Misty in her arms and tries to coax her back. She utters a spell but it doesn’t do anything. Time’s up and Misty Day falls to ash in Cordelia’s arms. Oh. My. Gosh. The first witch is dead.

Cordelia wants to take a moment for grievance but the girls are ready to get on with it. The next task is transmutation. The girls have some fun with it and are playing a game of tag. By the end of the game, Zoe ends up impaled on the front gate. She dies. Queenie can’t bring back Zoe with the magic of life transference. Cordelia wants Madison to try and bring Zoe back, but Madison will not do it. She demonstrates her ability by killing a fly and then brings the fly back to life — in an effort to display her power without resurrecting her competition. Basically, at this moment, Madison is the only one left standing. She’s the Supreme . . . as of now.

Meanwhile, Cordelia and Myrtle talk about the future of their line. Cordelia can’t believe Madison is the future leader. Myrtle admits that she thinks Cordelia could be the next Supreme and encourages her to perform the Seven Wonders — because she’s ALWAYS has royal blood running through her veins.

Cordelia doesn’t have much faith, but she gives it a go and, from what we see, she kicks ass. She lights a candle. Lifts a piano. Controls Queenie’s mind. Next, she descends into Hell.  Will she be able to get back?

Cordelia returns from the underworld and, upon her arrival, proves she can also handle transmutation. She’s completed five out of seven wonders. Next wonder up: divination.

Madison reenters herself in the competition. Cordelia successfully divines the whereabouts of an item in the house. When it’s Madison’s turn to divine the whereabouts of an item, she fails. She’s pissed that she’s failed the Seven Wonders and explodes on everyone. She says she’s leaving the coven, going back to Hollywood, and will reveal everything — about their secret world. Meanwhile, Kyle proceeds to strangle Madison because he’s mad that she let Zoe die.

Meanwhile, Cordelia resurrects Zoe. She’s back in the game. As of now, Cordelia’s proven herself as a Supreme. She’s completed all Seven Wonders.

Madison is dead on the bed. Kyle stands above her. Spalding comes in and says nobody will suspect a thing.

Cordelia has risen as the next Supreme.

Next, we see her giving an interview to a news station, wherein she talks about witches and wants to encourage those who identify as such to come forward and join them. She invites all those young girls who think they might be witches to come to Robichaux’s Academy.

Myrtle tells Cordelia that she wants to be burned at the stake, a second time, because she needs to pay for killing the two witches on the council. Delia can’t fathom this hard truth but, after Myrtle convinces her that she’s now in charge and that her actions will ripple throughout the coven (and to the Council), she understands. Somewhat. Myrtle is taken to the desert where she’s to be burned at the stake.

Myrtle Snow, my sweet Myrtle, burns at the stake.

After the burning, hundreds of witches are lined up outside the academy. Queenie and Zoe stare out the window and look at the young girls looking for a home, a place where they and their powers can be accepted. Cordelia says that Queenie and Zoe will not only be her right hands but her council. Q and Z ask her if they should open the doors . . . but Cordelia says no. There’s one more thing she needs to do first.

Fiona goes on to say how she fashioned a new memory for the Axeman to fake out Cordelia’s gift of second sight. Fiona admits that she came back to kill the new Supreme, but when the light’s turned on we see that Fiona is dying and has absolutely no power left. Cordelia’s ascension to power has, in effect, sucked Fiona’s energy from her body. Fiona reveals that this is the universe’s way of conserving energy.

Fiona wants Cordelia to kill her, to put her out of her misery, but Cordelia can’t kill her own mother. She tells her to feel the fear and pain of dying, to let it all in, and accept it. “The only way out is through.”

They embrace, they hug. Fiona dies in Cordelia’s arms.

Fiona wakes up in a sunny room with a bed. She puts her shoes on. The Axeman walks in with catfish. She realizes this is her Hell. She freaks out and realizes she can’t spend eternity here. She wants her daughter back. She wants out of this place. Papa Legba laughs in the distance. Fiona Goode is NO MORE.

Cordelia walks down the stairs. With Queenie on her right and Zoe on her left, they greet the new girls into the academy. One of the new girls asks, “What’s a Supreme?”

Queenie (speaking about Cordelia) says, “You’re looking at her.”