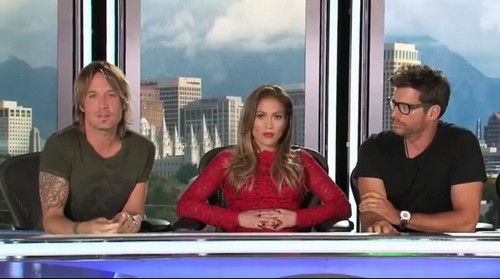 Are American Idol hosts Jennifer Lopez and Harry Connick Jr. embroiled in a bitter feud over Jennifer’s diva behavior? According to a recent report from Star Magazine, the whole issue started when Jennifer made ‘diva demands‘ before Season 13 began. However, she reportedly didn’t factor in Harry’s popularity with the fans, and she didn’t comprehend that she was no longer the biggest star on the show. Um, she may have been acting like a diva, but seriously – Jennifer Lopez >>>> Harry Connick Jr. when it comes to popularity and name recognition.

Anyway, that apparently led to a falling out between the two judges, with Star’s source explaining, “Jennifer can’t stand him, and she thinks Harry is one of the most childish grown men she’s ever met. She thinks he’s immature and lame, and she only talks to him if she has to.”

The source also adds that Jennifer just pretends to be sweet on camera, explaining, “J-Lo may be great at masking her feelings on camera, but behind the scenes she is definitely still a diva.”

While Harry’s rep has already jumped in with a denial, claiming that Harry ‘adores‘ Jennifer and takes every opportunity to express that, I think it’s a bit telling that Jennifer hasn’t chimed in with her side of the story. Either she thinks it’s a waste of time to even bother correcting a rumor from Star, or she just doesn’t care and finds this whole thing a waste of time.

What do you guys think? Does Jennifer act like a diva on the set of American Idol? It’s not the first time Jennifer’s been accused of that, so it wouldn’t be shocking to find out that it’s true. But has that led to problems with her co-judges? Let us know your thoughts in the comments.