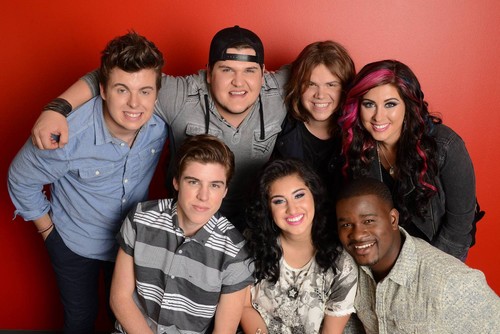 It’s another exciting night for AMERICAN IDOL on FOX. Season 13 is really heating up.  On tonight’s episode the top 7 perform.  The theme is “Competitor’s Pick,” in which the finalists choose selections for the others to sing.

On last week’s performance show the Top eight performed again – C.J. Harris, Jena Irene, Caleb Johnson, Jessica Meuse, Alex Preston, Dexter Roberts, Malaya Watson and Sam Woolf – performed the songs from the 8os.  Because the judges used their save the previous week when Mataya Watson received the least amount of votes last week she was sent home.  Did you happen to catch the last episode and see which cast member was sent home? If not we recapped who got the boot and it’s all right here for you.

On tonight’s episode the Top 7 finalists take the stage in hopes of impressing the judges and winning America’s vote. The Top 7 — C.J. Harris, Jena Irene, Caleb Johnson, Jessica Meuse, Alex Preston, Dexter Roberts and Sam Woolf have to tackle with a “Competitors’ Pick” theme.  Each finalist will select a song for his or her fellow combatants – it will leave them all with lists of six songs from which to choose.

Judges Comments: Keith – “That was a good choice man, I love that song.  That was a great choice for you and I think the fact that you took it way up really highlights your strength.  Great job.”  Jennifer – “I love Caleb.  It’s dangerous for them to put you first in the line up because look at what you guys have to follow.  Pretty amazing, good job.  Harry – “Great song choice, I like the way you change up the melody to make it sound like a tune that could be on your record.  I loved your song choice and that was a great way to start the show.”

Judges Comments: Jennifer – “you know Jessica I have been a fan of yours since the beginning, this is the first time I’ve heard you off vocally in the verses.  You seemed uncomfortable, I don’t know if it was all the fireworks.”  Harry – “I agree with Jenn it wasn’t your best performance.  I would suggest, because I have noticed this over the weeks, there is a lack of rhythmic delivery when you perform.  Go back to the hotel and put on some funk or hip-hop and just dance and watch yourself in the mirrow.  You have to drive it rhythmically, when it is a groove like that you gotta sing like that.  We call it play like you live in New Orleans.”  Keith – “Jess, first of all, your voice is what I have always loved about you.  I felt a dissipation of energy, the reason Miranda kills it is because she comes off as really pissed off.  You’re way better than that.  If you want to stay in this competition, get centered and get lyrical, because you can really do it.”

Judges Comments: Keith – “How are you doing man?  That’s one of my absolute favorite Mayer songs and it’s a really good song for you, that was a good call Caleb.  If you are going to do an emotional thing I like it to be more of an arc, that was the only thing.  Man, I like your voice every time you sing, that was abullseye man.”  Jennifer – “For me every week you seem to be more and more comfortable up there, it’s like he said you gotta start looking for moments that will really life the crowd.  Everybody loves the sound of your voice, but now it’s got to be about finding a moment that will bring the crowd to their feet.  I want that for you.  That was one of your best performances.” Harry – “I think you have arguably the best gift that a performer could have and that is being able to connect to an audience.  You always connect.  Personally I think that was your best performance to date.”

Judges Comments: Keith – “hey Dexter, it’s good to have the band on stage right?  That’s cool, I liked that song.  All I would say is be more careful when you do songs that have an intensity to them but the melody is down.  Just be aware of that.  Don’t let the adrenaline pull down.”  Jennifer – “I really like this one for you.  I’m used to the happier Dexter.  This song showed us a good side of you.  I think what I would say to you and all the contestants at this time is these performances need to be spectacular.  Now we are at a new level, we’re towards the end, we’re almost to the Top 5.  I feel like you guys need to push yourselves vocally and push yourselves with what you are doing with the band and performing.”  Harry – “Who’s idea was it to do the different arrangements with the band?  Those are the things about the performance that I liked.  Again I have to say at the end you didn’t really do anything differently with the vocal.  You are limiting yourself to singing the exact same thing that’s on the record.  For you I want it to sound like more than you just singing along to the radio.  No matter what song that is chosen you have to make it your own.  You need to think how can I make this my own?”

Judges Comments: Jennifer – “I have to say I agree with them Alex, that’s why I let them have a moment you deserved that applause.  You should really think your boy Dexter because that was a perfect song.”  Harry – “That was a perfect song.  As I have gotten to know you over the weeks I have realized that you realize there is great beauty in smaller performances.  I always question is that going to be able to win?  But your conviction in that world-that was a great song.  By far my favorite performance of the night.”  Keith – “You know Alex you have your signature things that you do and they’re yours, you just respond naturally.  You’re chugging along artistically and suddenly you make it an Alex song.  You do it really really well, it was great.”

Judges Comments: Harry – “Sam you are a work in progress, progress being the operative word.  That’s a good thing.  You ar epreogressing every week.  My only problem is the song choice.  It’s not Hey There Delilah, you need a song that everyone could go along with.  I think you need a more familiar song.”  Keith – “I agree with Harry.  I like the way you look tonight and you are starting to get comfortable.  Keep doing what you are doing.  You’re only 17 and we are trying to get a life time of experience in you in just a few short weeks.  You’re doing a rally good job considering.”  Jennifer – “As I was watching you here I didn’t feel as much, but when I looked down into the monitor and looked into your eyes I could tell you really were pushing and that’s what America sees at home.  Those are the feelings that are going to make that song real for everybody so in that sense I think you did a great job.”

Judges Comments: Keith – “I;m going to make it quick.  The time starts now.  I loved it.  I love your fearfulness and how bold you are, I wish I had more time to talk.”  Jennifer – “You Jeanify every song you song.  I have so much to say to you, I’ll say it to you next week because you are going to be in for the long hull.”  Harry – “You a re a phenomenal talent.  You sing with great humility and intrigue.  Unquestionably the best performance of the night.  Don’t be fooled by the fact that I don’t clap and don’t stand up.  I’m a judge and this is my version of being a judge I have to be focused.  You are a major talent and you did some major damage tonight.”