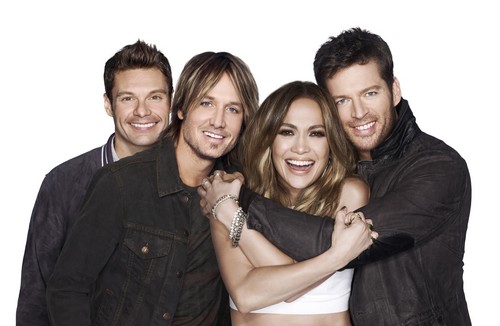 Tonight AMERICAN IDOL continues on FOX with a new episode.  Tonight’s show is the final night of the  Hollywood round, by the end of the evening the 30 finalists will be revealed and then we are on to the live performance round.  Did you watch last  night’s episode?  We did and we recapped it right here for you.

On last night’s episode the Hollywood round continued and 77 remaining contestants got one more chance to impress the judges with solos.  They performed one song and they had one last change to bring their all to move ahead to the live round.

On tonight’s episode it is the end of the Hollywood round and the last of the semi-finalists will be revealed.    We will find out who the 16 boys and 15 girls are.  But its not over then the last two guys chosen will still be in jeopardy with their IDOL fates left in the hands of viewers. After this tonight’s show, fans will get the chance to vote for which guy they want to make it to the Top 30 semi-finalists.

Next week we are going into “Rush Week” and it will be LIVE for two nights of performances and the season’s first results show. In a new twist, not all 30 singers will get to perform, as the judges – Jennifer Lopez, Keith Urban and Harry Connick, Jr. – will choose only whom they think are worthy of America’s vote, leaving some packing their bags before they get a chance to sing.

Tonight’s show is going to be an exciting one, which I’m not going to miss and neither should you. So be sure to tune in for our live coverage of FOX’s American Idol XIII – Top 30 Revealed  – tonight at 8PM EST! Celeb Dirty Laundry is your go to place for all the up-to-date American Idol News!

Now it’s time for 17 year old Marielle Sellars to learn whether or not she has made it in the Top 30 of American Idol. She heads up to speak to the judges and find out her fate. Harry reveals that Marielle’s performances have been inconsistent, but they have decided to send her to the next round. Marielle Sellars is in the American Idol Top 30.

17 year old Jena Ascuitto heads to the judge’s chambers to learn whether or not she has made the Top 30. Harry says that Jena is “the sleeper,” no one expected much from her but then she broke out and surprised everyone. Jena will be moving on to the Top 30 and performing next week on the live American Idol episode.

This isn’t the first time 22 year old Caleb Johnson has been to Hollywood Week, he actually auditioned during Season 11 of American Idol, but the judges sent him home during Hollywood Week. Caleb heads up to the judges to find out whether he will make it to the Top 30 this season. It looks like this was his lucky season, Caleb has made it through to the American Idol Top 30.

Up next is 20 year old New Yorker Ethan Harris, Harry liked Ethan’s solo round performance during Hollywood Week and thought that he was an “interesting cat.” Ethan hopes to leave behind his job at a retail store and make music for a living, and he is in luck because Jennifer says he is in the American Idol Top 30.

Unfortunately, Sarina Joi Crowe and Nalani Quintello don’t receive good news when they head upstairs to speak to the judges. Sarina and Nalani are both going home, they didn’t make the Top 30.

Majesty Rose York impressed the judges during her Atlanta auditions, however she slipped up during her solo rounds during Hollywood Week and forgot the words to the song she was singing. Jennifer Lopez tells Majesty that the judges “have high hopes for her” and she has made it through to the Top 30.

15 year old Briston Maroney has been pretty low-key during Hollywood Week, but the judges like his “sound” and unique voice. Harry Connick Jr. is concerned that Birston is so young and will be so far from his home in Tennessee, but they are putting him through to the Top 30. He will be performing next week on the live Top 30 show.

Brandy Neelly of Kentucky and 17 year old Briana Oakley of California head upstairs to hear from the judges whether or not they will be moving on to the Top 30. Brandy and Briana have both auditioned for American Idol in the past, but neither of them have made it through to the Top 30 before. This year is different though, the American Idol judges reveal that they are both in the Top 30.

16 year old Kenzie Hall had a group session during Hollywood Week, and even managed to impress the American Idol judges with her rendition of Macklemore’s rap. She dedicated her solo round performance to her Mom because she wanted to make her proud, and her Mom will definitely be proud because she has made it to the American Idol Top 30.

21 year old Savion Wright has “done his own thing” since he was chosen during the Austin Auditions to head to Hollywood Week. Although, the judges did think that his solo performance was “flat.” Unfortunately Savion Wright didn’t make it in the Top 30, he is headed home.