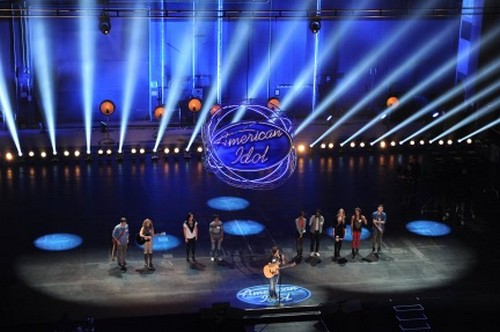 Tonight AMERICAN IDOL continues on FOX with a new episode.  Tonight’s show is Rush Week and the Top 15 female vocalists perform in hopes of making the final cut.  Did you watch last  week’s episode?  We did and we recapped NIGHT 1 and NIGHT 2 right here.

On last night’s episode it was the end of the Hollywood round and the last of the semi-finalists were revealed.    We found out who the 16 boys and 15 girls are.  But its not over then the last two guys chosen will still be in jeopardy with their IDOL fates left in the hands of viewers. After last week’s show, fans got the chance to vote for which guy they wanted to make it to the Top 30 semi-finalists.

On tonight’s episode it is the beginning of “Rush Week” and the show will be live for two nights of performances and the season’s first results show. In a new twist, not all 30 singers will get to perform, as the judges – Jennifer Lopez, Keith Urban and Harry Connick, Jr. – will choose only whom they think are worthy of America’s vote, leaving some packing their bags before they get a chance to sing.  Randy Jackson returns as in-house mentor, and the Top 15 girls will take the brand-new stage to perform.

Tonight’s show is going to be an exciting one, which I’m not going to miss and neither should you. So be sure to tune in for our live coverage of FOX’s American Idol XIII – Top 30 Revealed  – tonight at 8PM EST! Celeb Dirty Laundry is your go to place for all the up-to-date American Idol News!

Majesty Rose will be the first American Idol contestant to perform live tonight, she will be performing Pharrell’s song “Happy.” Jennifer congratulates Majesty and tells her she has the “confidence she needs to make it through the competition” and she thinks she did an “amazing job.” Harry and Keith Urban were also both impressed with Majesty’s rendition of “Happy.”

Kristen O’Connor is the next contestant to takes the stage. She has chosen to sing Adele’s song “Turning Tables.” Harry Connick Jr. thinks Kristen “delivered a really powerful performance” and thinks that she “did a really nice job.” Keith Urban adds that Kristen has a “killer range.”

The next Top 15 girl that the judges chose to perform tonight is contestant Briana Oakley. Briana chose to sing Demi Lovato’s song “Warrior.” Keith was pleased with Briana’s song, Jennifer noticed that she was nervous in the beginning, but she knows that Briana has a “privileged voice” and is a “young Whitney Houston.”

The next American Idol contestant to perform live tonight is Michigan high-school student Jena Irene. Jena has decided to sing “Painted Black” by the Rolling Stones tonight. Jennifer thinks that Jena’s performance was “sultry,” she thinks that Jena is “kind of a badass.” Keith says Jena has been one of his favorites since auditions, and he even likes the way she holds the mic stand.

The next Top 15 girl to perform tonight is Bria Anai. She has decided to sing “Wrong Side Of A Love Song” live tonight. Harry Connick Jr. thought that she shouted too much, but the audience disagrees and boos him. Keith agrees with Harry, but Jennifer thinks Bria has “star written all over her.”

Marialle Sellars has been selected to perform next, she chose to sing Katy Perry’s popular song “Roar.” Despite having a malfunction with her shoes, she managed to pull it off. Keith Urban thinks that she chose a poor song to display her vocal talents tonight. Jennifer thinks that she should have used her guitar tonight. Harry agrees, she definitely she have sang a different song than “Roar.”

The next Top 15 girl to perform tonight live on American Idol is Jessica Meuse, she decided to sing “Drink A Beer,” by Luke Bryan. Jennifer “loves Jessica’s voice,” and thinks her “country tone is really appealing.” Harry loves her voice and thinks she brings something new to the table, but he didn’t really think the audience could “feel what she was singing about.”

Emily Piriz is the next contestant to take the American Idol stage, she has decided to sing Grace Potter’s “Paris Ooh La La.” Harry thinks that the lyrics of the song were inappropriate, but Emily is happy with her song choice. Jennifer thinks that she performed the song “very well” and showed the judges that she is very comfortable on the stage.

MK Nobilette has been chosen to perform next on the live Rush Week episode, she has chosen John Legend’s “All Of Me.” Keith thinks MK chose the perfect song, and she had a “really beautiful performance.” Jennifer loved MK’s performance, and Harry thinks that she is an “elegant and articulate singer.”

It’s time to reveal the American Idol Top 15 for the guys. The judges couldn’t decide whether to keep Ben Briley or Neco Starr, so they had America decide. America voted, and Ben Briley is in the Top 15. Neco Starr is headed home.

It’s time for the last performance of the night, Malaya Watson. After her performance, she commends Jennifer’s dress. Jennifer says every time Malaya gets on stage, “it is epic.” Harry says Malaya has “to the wall energy.”

The Top ten American Idol girls have performed, it is time for America to vote. Tomorrow night the Top Ten guys will perform for their Rush Week.