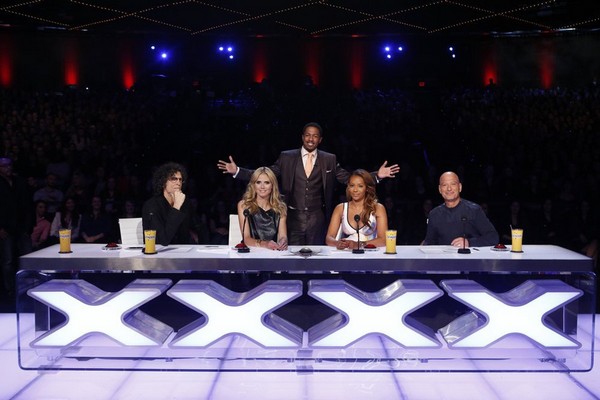 Tonight on NBC their hit reality talent show AMERICA’S GOT TALENT returns for the seventh episode in its ninth season where acts compete at Judgment Week in New York City.

On the last episode, celebrity judges Howie Mandel, Mel B, Heidi Klum and Howard Stern continued with auditions around the country. Nick Cannon hosted this variety competition series which features a colorful array of hopeful future stars as they compete for a chance to perform at the famed Radio City Music Hall and win the $1 million prize. In a surprise move, Howie used his Golden Vote and put the Hudson brothers through to the next round; they are YouTube comedians from Atlanta. Emmanuel and Phillip took the stage dressed as women, and began rapping about ratchet women. Howard Stern hit his “X” halfway through their act. He said that “it is all fun and games but at the end of the day he is looking for a million dollar act.” Mel B. on the other hand said that she loved it, and Heidi said she “really didn’t get it.” Heidi voted “no.” Did you watch the last episode? If you missed it we have a full and detailed recap, right here for you.

RECAP: Howie goes to surprise Blue Journey as they are working on their act, he tells them that they will not be performing on judgement week thought they loved what they did; instead they go right through to the live shows. The two are shocked and are so happy.

We now see a complication of the judges going to their favorite acts houses to tell them they are moving on to the live shows.

The first category this week is magic, the act going up right now is Mike Super and he tells Howie to think of somebody he has a personal connection to; he places Howie a chalk and chalkboard. He makes him stare at it and asks Nick to come out as well, Nick is going to name a random two digit number which is 23. Mike asks Desmond to use the chalk for him, now he has a zodiac calendar on the chalk board; the name he thought of Steve is on the other chalkboard. Each row on the calendar is 23.

Next up is Psycho Jack, he goes on stage and does his illusion act for the judges and they really don’t seem impressed; something is going wrong. They notice some trouble going on and they noticed he screwed up and it was a terrible performance.

Howard asks Nick to bring out Psycho Jack right away, they see him and tell him that they didn’t like his act; they saw a lot of parts going wrong when he was doing the act. Howard tells Psycho Jack that it’s the end of the road for him, Psycho Jack thanks them and leaves.

Next up is Franklin Saint, he is doing something that defies logic and nature; he believes he is better and is confident in his skills. Franklin does his act now where he shrinked a bottle in his hand and filled a can; they judges think it was incredible.

Next up is Mat Franco and his is a big magic nerd, everyone who went to football camp was normal but he himself went to magic school; he was impressed that his first audition did so well. Mat gets up on stage and performs a card trick for the judges; it’s the first time he’s performed it for an audience. He blows the judges minds with his performance; Howard says he’s never seen a trick like that before.

Next up is Next up is the dance category, the first act is Sean and Luke; they are tap dancers from Chicago. They believe they did well with their audition and loved flirting with Heidi. The two knew they messed up a bit, though Howard says they are not memorable at all.

Next up is Solto Esenglov and he shocked the judges with his weird body movements.

Next up is Dragon House, they do an interesting robotic dance that really makes the judges wonder how they do it.

Next up is Andrew and John two salsa dancers; Andrew is gay but John is straight. They were very proud of their first audition. Howard says their passion and love for dance could win this.

Next up is Quintavious and he wants to win to help his mother out with raising not only himself but his brothers as well; this is all for his family. He decides to go ahead and sing a Michael Jackson song.

Next up is Grace Ann Gregorio singing opera, Mel B already calls the Quintavious is better.

Next up is Mara and she is singing, she was amazed at how well her first audition went; she now is singing for her family and her mom. Mara was nervous and Howard says she is a real singer; they are all in agreement and call out Mara right now. Howard says they can’t put everyone through and their job is tough, they say the worst part about being a judge is telling people to leave; Howard tells Mara that she was insanely great and they are putting her straight through to the next round.

Next up is Julia Goodwin singing a song and having her father play the piano for her during the performance.

Next up is the comedians, the first comedian on stage is Darik Santos and he is prepared for his act. The judges like him.

Next up is Wendy Liebman with her comedy act and the judges are chuckling quite a bit; they thought she was prett good and Heidi says that anyone can entertain a small group.
[10:17:27 PM] Chris: Next up is Joe Matarese, he’s been a comedian for 25 years and has toured around the world; but he doesn’t make enough money still. His act isn’t going that well and the judges don’t seem very impressed by it at all.

Next up is Juan Carlos and he is a roller blade dancer, his first audition was awesome and everyone loved him but Howard; he wants to win so he can entertain the whole world. He starts his act and Howard is very unimpressed, like he can’t take any more of it.

Next up is a yo-yo artist named John Narum, he wants to make yo-yo more than just a toy but an art; his performance was very loved by the judges.

Next up is Loop Rawlins and he is a wild west performer, his dream is to make sure he can provide for his family and he spun flaming guns and played with a flaming lasso.

Next up is The Mighty Atom Jr. and he is 93; he is going to pull a truck with the judges in the back of it using only his teeth. Mighty Atom Jr. is trying his best and the truck is starting to move and makes it to the line.

Next up is J.D. Anderson and he’s going to be running through solid ice and the back of his head is actually bleeding; he goes right to the medic after his crazy performance.

Next up is Carly Jo Jackson singing and playing her ukulele; the judges like her but were not totally amazed.

Next up is Anna Clendening, she had a really hard time to get on stage because she was crying and was very nervous; she really pushed herself through it and hopes she did well.

Last for today is Kelli Glover, she auditioned in 2009 but got cut in this part of the competition; she is really hoping that she can finally make a comeback.