BY Heather DiPietro on May 12, 2014 | Comments: one comment
Related : Amy Purdy, Dancing With the stars, DWTS Videos, Reality TV, Television 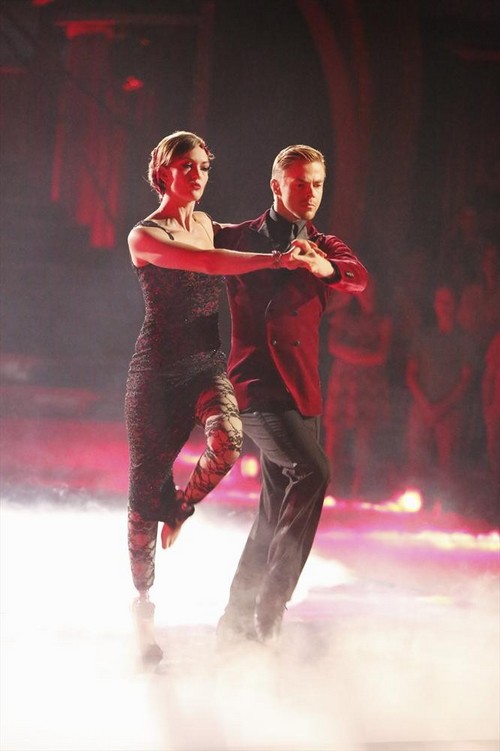 Three-time World Cup Para-snowboard  champion Amy Purdy danced a Jazz dance, on tonight’s season 18 episode 9 of Dancing with the Stars with Derek Hough for their DWTS semi-final performance.  We posted a nifty bio of Amy Purdy so you can get more familiar with her.  Emmy Award winning director and choreographer Kenny Ortega makes his “Dancing With The Stars” debut as a guest judge on American Icons Night when he sits alongside Len Goodman, Bruno Tonioli and Carrie Ann Inaba  If you missed tonight’s show you can read a full and detailed recap, right here.

On last episode Amy performed a Argentine Tango and Carrie-Ann loved it saying, :  “You know season 18 we have seen it all it is surprising anything can get me so excited.  I stopped watching a couple of times.  This season the competition is so high.  You put your self in a class of your own.”  They scored Amy 40/40.

Amy Purdy and professional dancer Derek Hough: dancing a Jazz.  Amy has been getting ready for her dance tonight.  She tweeted, “Have I thanked all of you yet this week for your love, support and votes? If not then Thank You!! You all rock!!!”

Judges comments: Bruno: “I’m telling that was another classic moment on DWTS.  Week after week you keep surpasing yourself.  This was classic jazz at its best.”  Carrie Ann: “Girl you were working it.  You killed that routine.  In the side-by-side there was one off moment.” Len: “I watch that and Derek I solute you that was fantastic.”  Kenny: ” Derek you redefine choreography for this generation.  You said pressure does not exist you create it yourself.  It was so clear, that was perfection.”