Angelina Jolie And Brad Pitt’s Children Lead Bizarre Lifestyle: Forced To Do Underwater Scream Therapy And Speak Everything But English! 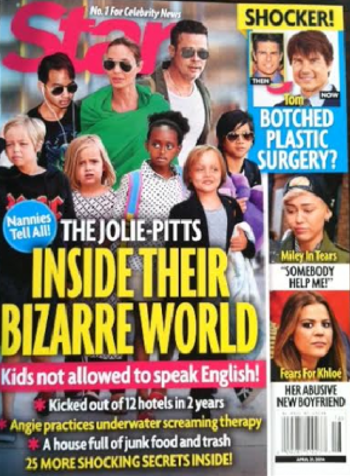 In another story claiming Angelina Jolie and Brad Pitt‘s children lead lives of weirdness, chaos, and strangeness, a new report says that the children of these A-list celebs aren’t entirely normal — and it’s the parents’ fault! Star begins by saying Angelina “is not nearly as compassionate and caring as she would have the public believe. Angie can be a bitch; she’s super vindictive. She hates [Brad’s ex-wife] Jennifer Aniston still and is really competitive with her.”

Ugh. I can handle more stories about strange children and weird (alleged) celeb lifestyle practices, but if I hear another story about how much Angie “despises” Jennifer Aniston, I’m going to scream. Sure, they’re not BFFs — and they won’t ever be. But I truly believe that Angelina Jolie doesn’t spend every waking moment of her incredibly busy life thinking about how much she hates Brad’s ex. She don’t have no time for ‘dat!

So let’s get into the details about the childrens’ bizarro lifestyles, which have been revealed by nanny sources for the mag. One of the leads claims that “the kids run the house. Those children are wild. There’s constant screaming at all times of the day and night.”

Another source adds, “The children are so messy that they’ve been kicked out of 12 hotels in two years for completely trashing the rooms!” The magazine also says that the children are forced to practice daily routines of underwater scream therapy (which I imagine involves one screaming while submerged beneath water?) and aren’t allow to speak English in the home. Of course, they have an arsenal of 5 other international languages they’re allowed to employ in their day-to-day existences.

What do you make of this story? Believe any of it? Pick up the latest issue of the magazine today and get the entire scoop!