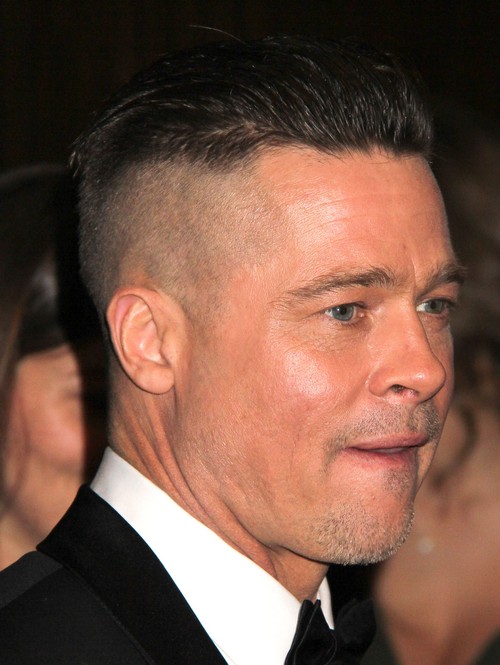 According to a new report from the National Enquirer, Angelina Jolie is ‘jealous’ of Brad Pitt‘s crush on Lupita Nyong’o. Apparently, Brad has ‘let the cat out of the bag‘ by praising Lupita effusively at the recent awards shows, which has apparently left Angelina seething with jealousy.

The source also adds, “Brad’s fixation with Lupita isn’t sitting well with Angie. Despite his devotion to her and their children, Angelina can’t let go of the nagging worry that Brad is on the prowl for the next hot thing to come along in Hollywood.” According to the report, Angelina led Brad the ‘riot act‘ after he touched down in Australia last week, where Angelina and the kids have been taking residence while she finishes filming Unbroken.

You know, although everyone’s quick to dismiss this report, Brad does have a history of dating all the Hollywood ‘It’ girls at one point – Gwyneth Paltrow, Thandie Newton, Claire Forlani, Juliette Lewis, Jennifer Aniston, and of course, Angelina Jolie. And right now, no one is hotter than Lupita Nyong’o, who’s been riding a wave of unprecedented affection and gushing this entire awards season. In fact, she’s probably going to win that Oscar purely on charm.

Anyway, does Angelina really have anything to be worried about? I doubt it. Brad’s devoted to her and their children in a way he never was with Jennifer Aniston or his other girlfriends, and plus, he didn’t act with Lupita, he just produced her movie. And he’s obviously proud of 12 Years a Slave, and this is his one big chance to win the Oscar, so obviously he’s going to campaign for it- and that includes spending time with the actors in the movie. And sure, he may harbor a little crush on Lupita [who doesn’t?], but that doesn’t mean he’s going to hook up with her behind Angelina’s back.