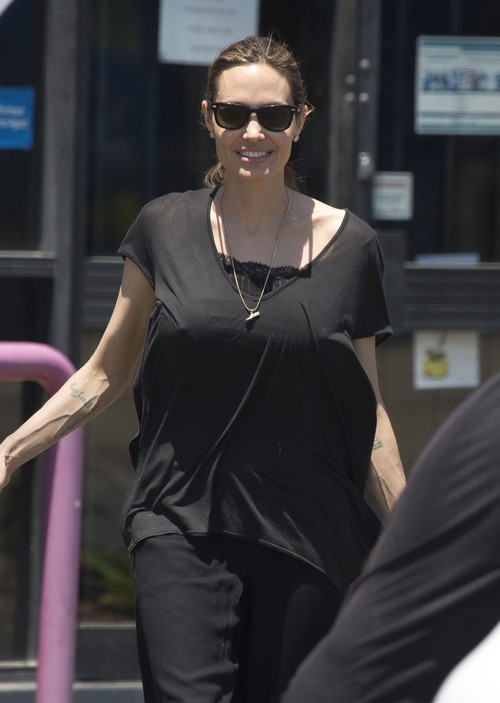 This National Enquirer article is insulting on so many levels, I don’t even know where to begin. The title of the article is, “Angelina Jolie wants to look as beautiful as possible when she finally walks down the aisle with Brad Pitt this summer — so she’s planning surgery to fix the bulging veins in her arms and hands.”

So basically, they’re insinuating that when a woman has ‘bulging veins’ in her arms and hands, it’s somehow disfiguring? Many people have veins that stick out of their hands and legs, and for a lot of them, it has nothing to do with age or health – it’s just the way their skin is. Surgically Remove

For Angelina, sure, her rather gaunt appearance and lack of body fat probably lends the veins to probably appear more, but that doesn’t mean that it detracts from her appearances in any way. And also`, even if it did, Angelina Jolie’s no Madonna. She’s proved that she’s willing to undergo major surgeries for her health and the future happiness of her children, but there is no benefit other than cosmetic in getting rid of her arm veins.

The second part that’s insulting is that the report suggests that Angelina wants to get rid of the veins to be as beautiful ‘as possible’ for Brad Pitt. Um, I’m sure her veins sticking out is the first thing on Brad’s mind when thinking about their wedding. I’m not saying they’re not appearance-conscious people, just that they have way bigger priorities. If Angelina really wants to get rid of her arm veins, there’s a simple solution: gain some weight. But going through cosmetic surgery to get rid of them is fraught with risks, and I doubt she’s willing to take them.