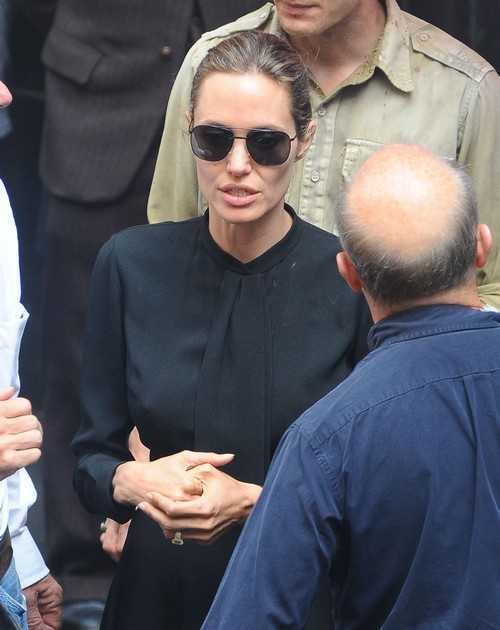 Angelina Jolie‘s weight and health always seems to be a tabloid headline, especially after the news of her double mastectomy. The latest report from OK! Magazine claims that Angelina has once again started to worry onlookers with her ‘scary‘ skinny weight.

The report claims, “Angelina is neglecting her health as she adheres to a grueling work schedule on Unbroken. Angelina is at her lowest weight ever. She’s a total workaholic and whenever she gets into a new project, eating falls by the wayside.”

A supposed source also adds, “She feels like she gets all the vitamins she needs in some low-calorie juice shakes, but the truth is she’s terribly malnourished. She’s just 93 pounds. It’s almost superhuman that she’s able to function at all.”

93 pounds is such a specific number, and it’s always the same number that’s re-used in Angelina’s tabloid weight stories. I wonder if they just decided to roll the dice, and then use whatever numbers came up in the draw. Now, I don’t disagree that Angelina is very skinny – sometimes, it may even look ‘scary’ in photographs. But the woman is taking care of six children and running a massive set – she’s obviously going to be very active, and that keeps her weight constant. It’s not like Angelina being skinny is anything new – for the past ten years, she’s pretty much constantly been this skinny, except for when she was pregnant.

Sure, she had a bit more curve to her during her Tomb Raider days, but that era is long gone. And despite tabloids trying to make us believe otherwise, Angelina doesn’t really exhibit any outward signs of exhaustion or unhealthiness.