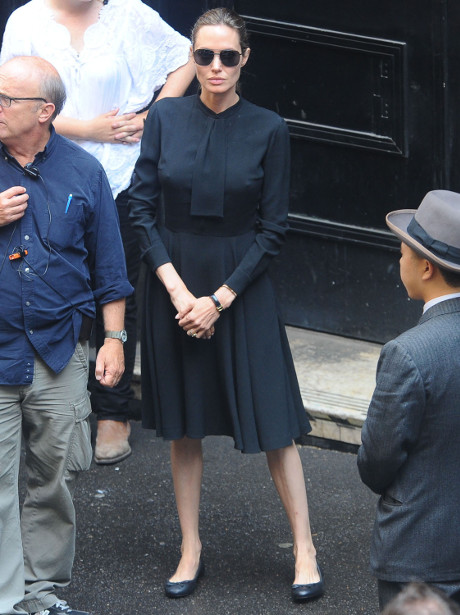 In recent reports that have surfaced, some claim that Angelina Jolie and Brad Pitt have called off their wedding, which has been in the celebrity wedding lineup for what seems like ages. So what could’ve put a halt to this much anticipated, golden ceremony? Some are saying that it’s Angelina’s dangerous new diets — which have supposedly hurled her into dangerous, near-anorexic territories — that have turned Brad off; others are claiming that Brad cheated on Angelina with a mysterious brunette.

In a recent edition of OK!, an insider spills news on Angie’s drastic weight loss and current state: “Angelina is at her lowest weight ever. She’s a total workaholic and whenever she gets into a new project, eating falls by the wayside…She feels like she gets all the vitamins she needs in some low-calorie juice shakes, but the truth is she’s terribly malnourished…She’s just 93 lbs. It’s almost superhuman that she’s able to function at all. She can’t seem to take care of herself when she’s on her own. She always forgets to eat!”

But could Brad and Angelina’s relationship be crumbling before everyone’s eyes because Brad has suddenly grown tired of being with just one woman? Star reports that Brad cheated, which, if in fact true, is bound to have repercussions: “[Brad] welcomed the girls with a huge smile and bought them a round of tequila shots, but he was particularly impressed with a beautiful, petite brunette with shorter hair,” the tabloid describes of the scenario. “Everyone, including Brad, drank their shots, then moved over to a larger table where he made sure to sit next to the cute brunette.”

The magazine goes on to say that Brad was seen snuggling up close to the girl throughout the night and almost appeared as if he was on an intimate date with her.

What do you think about these WEDDING’S OFF! rumors? We have a difficult time believing that Brad would cheat and threaten the great thing he and Angie have going. As for Angie’s weight, she has gotten skinnier, but stress will do that, and I don’t think her condition is as severe as people are making it out to be. But who knows? You be the judge! Leave your comments in the discussion section below.