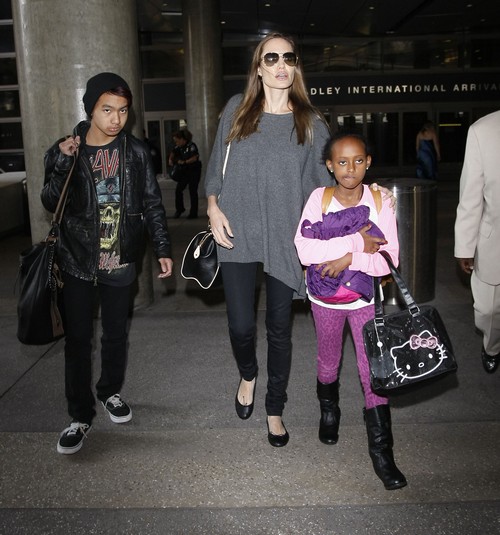 Does anyone actually think that Brad Pitt and Angelina Jolie will ever actually tie the knot? My guess is no and the reason seems to always have something to do with Angie finding a reason to back off. After two failed marriages Angie has gone on the record and stated that she didn’t see a reason to ever do it again but in recent years her six kids have kind of talked her into it. The thing is, Angie agreed to marry Brad for the sake of the family, not because she really wants to be his wife and so any reason to delay things is fine with her.

According to the April 28th print edition of National Enquirer Brad’s parents and siblings now belong to a church where the pastor is a complete hatemonger. Sources say that the Springfield, MO pastor condemns homosexuality and gays in general. Angie has said that she cannot justify marrying into a family that is so hateful. She has had lesbian relationships in the past and takes Brad’s family’s Church’s anti-gay position personally and refuses to align herself with them in any way.

Not to mention that Brad and Angie publicly stated they wouldn’t marry until marriage equality for same-sex couples was law. Given that position, how can Angelina marry into Brad’s conservative and anti-marriage-equality family? Let’s face it, while Brad himself goes along with Angie’s more liberal ‘progressive’ political and social leanings, his roots and his family are deeply conservative and uphold ‘traditional’ American values.  These differences matter to people who care about them and both Angie and Brad’s mom and brother definitely care.

Do you think that Angie has a valid reason to postpone the wedding or is this just another convenient excuse for her to wiggle out of something that she doesn’t really want to have to do anyway? Will she ever marry Brad or is this going to be one of those long-running engagements that will eventually end with this going their separate ways? Tell us your thoughts in the comments below!