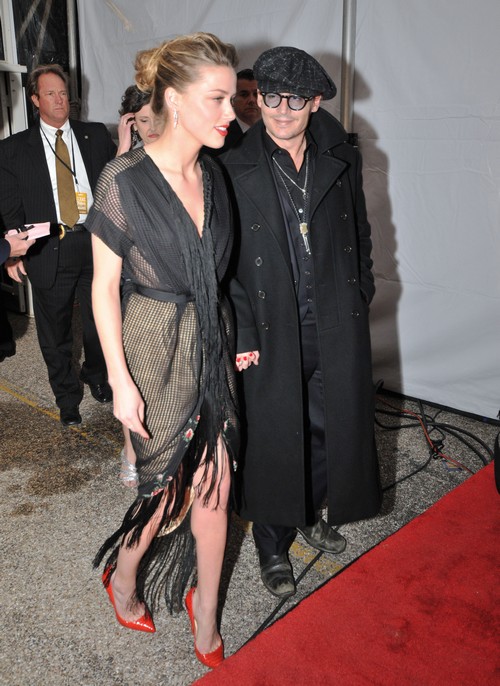 According to a new report from the steadily declining National Enquirer, Angelina Jolie has warned Johnny Depp against marrying Amber Heard. Right, because Angelina is jobless enough to warn an ex co-star not to marry his girlfriend?

The Enquirer’s ‘source’ claims that Angelina has warned Johnny to get a solid prenup before marrying Amber, and that he should ‘tread carefully‘ regarding his future with her. The source explains, “Angie is worried the 50-year-old superstar is going through a midlife crisis and has become enchanted with the much-younger actress. Angelina is worried about Amber’s motives, and she’s concerned he’s been swept off his feet by Amber’s charms.”

Again, why would Angelina Jolie care about Johnny Depp’s love life? She has six children, her husband just won an Oscar, she has a massive tentpole movie that she has to promote for the summer, and she has Oscar hopes for her second directorial effort. In between all this and her charity work, she’s going to spend time reading the gossip rags and giving her advice to Johnny Depp because she thinks Amber Heard is a gold digger? Puh-lease!

Plus, the Enquirer seems confused on who is hooking up with who in this love triangle/quadrangle. After they tried [and failed] to make the Angelina/Johnny rumors happen, they then tried to suggest that Johnny was worried about Angelina and Amber hooking up several months back. Since that refused to take as well, they’ve now switched up the story and are suggesting that Angelina is worried about Johnny and Amber.

How about we look at the most likely version of this story – Angelina doesn’t give two cents about Johnny’s relationships, and even if she did, I doubt Johnny would take advice from anyone on his romantic life.