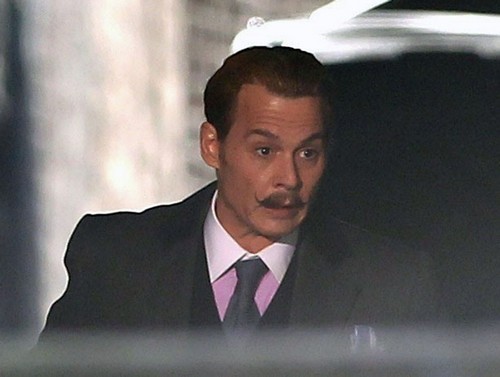 According to the latest bit of news from the National Enquirer, Johnny Depp is worried that girlfriend Amber Heard will cheat on him with Angelina Jolie. Yes, I realize the absurdity of the sentence I just typed, but let’s hear it out.

Apparently, Amber is ‘nursing a girl crush‘ on Angelina, and ‘desperately’ wants Johnny to introduce them. If you remember, Johnny and Angelina worked together on the craptastic Tourist movie, but I highly doubt they even keep in touch, so I don’t really know where this whole introduction thing is coming from. However, let’s say for the sake of argument that they’re ‘friends’. Why would Johnny introduce Amber to Angelina if he’s worried that they’ll hook up? Fallacies after fallacies in logic.

Of course, the Enquirer also has its ‘source’ add, “Most guys would have no problem with that. But the fact that both Amber and Angie have enjoyed lesbian relationships gives Johnny some cause for worry. Johnny feels Amber and Angie have a lot in common. But he’s just not sure where a friendship between them would go. A part of him fears that if he introduces them, sparks could fly and the who knows what?”

Are we just forgetting that Brad Pitt exists in this whole scenario? I guarantee, if Angelina hasn’t cheated on Brad by now, it ain’t gonna happen. I know people love to imagine Angelina as the homewrecker, but those days are far behind her. So even if Amber wants to ‘hook up’ with Angelina, who’s to say the interest will be mutual? And why would Johnny even be insecure enough to care? He’s freaking Johnny Depp. If Amber leaves, he’ll have a million women lined up to take her place.

What do you guys think of this report? Let us know your thoughts in the comments.