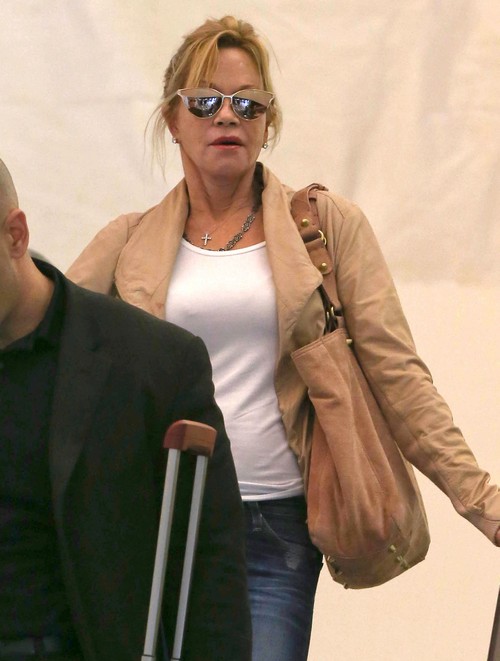 Antonio Banderas and Melanie Griffith have been married for seventeen years, which is practically forever in Hollywood. However, Antonio has apparently walked out on Melanie after years of dealing with their crumbling marriage. Did they just hide it well, or were there signs that their marriage was breaking apart?

According to reports, Antonio spend the recent holidays in Spain while Melanie spent it with some friends at Coachella. Apart from distance, the couple was apparently fighting about Melanie’s drug and alcohol abuse, and Antonio’s cheating and affairs with other women. After years of dealing with those problems, it looks like their marriage might have imploded from the pressure.

A source tells the National Enquirer, “Antonio has been working nonstop and Melanie’s basically been left home alone with their teenage daughter Stella. They never stop trying to make their relationship work, but Anto­nio has eyes for other women and is an admitted flirt. Melanie is always worried that a woman younger and prettier than her will steal him away.”

Considering that they’ve been married seventeen years, I’m inclined to believe that Melanie always knew about his flirting, and honestly, it wouldn’t be surprising to find out they have an open marriage. So if it wasn’t for the insecurity and the affairs, then what else could have caused their marriage to fall apart? Melanie’s drug and alcohol abuse is certainly a factor, and often times, that plays a big role in a couple’s divorce. Melanie has been out and about a lot more lately, flirting with different men and making more appearances on the Hollywood party scene – and without Antonio. Maybe he’s the one who’s fighting for their marriage, not the other way around?

It does look like Antonio and Melanie are not yet ready to get divorced, so it’s possible that they end up working through their issues. Antonio’s already supported Melanie through several rehab visits, so he’s clearly not giving up on her just yet. But will the two make it through the long haul? We’ll just have to wait and find out.

Melanie Griffith arriving alone on a flight at LAX airport in Los Angeles, California on April 24, 2014