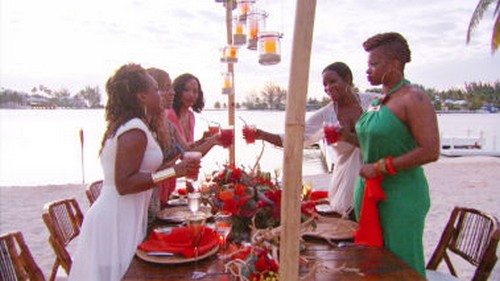 Tonight on VH1 Atlanta Exes returns with an all new Monday September 15, Season 1 episode 6.  On tonight’s episode.  Sheree asks Torrei to help her locate the father she has not seen in fifteen years; Christina tells CeeLo about her relationship with Willy.

If you have never watched the show before the cast, features the once significant others of an elite list of A-list men, has no shortage of fabulousness, ambition, love, and drama. “Atlanta Exes” stars Tameka Raymond, who once enjoyed the perks and privileges that come with being married to an international music superstar, interior designer to the stars Christina Johnson (ex-wife of Cee-Lo Green), and author and businesswoman Monyetta Shaw (ex-fiancé of Ne-Yo).  Also starring are entrepreneur Sheree Buchanan (ex-wife of former pro football player Ray Buchanan).

On tonight’s episode Sheree seeks Torrei’s help to find her father, whom she hasn’t spoken to in 15 years. Meanwhile, Christina relays news about her blossoming relationship.

Tonight’s episode is going to be filled with the usual Atlanta Exes drama and you won’t want to miss it, so be sure to tune in for our live coverage of the show tonight at 9:30 PM EST! While you wait for our recap hit the comments and let us know how excited you are about “Atlanta Exes”.

Tonight’s episode of Atlanta Exes kicks off at Toerrei’s house, Sheree pays her a visit. Sheree confesses that she has been thinking about her dad lately, she hasn’t seen him or talked to him in like fifteen years. She has tried to contact him, but his number is changed, and she doesn’t know any of his family members. Torrei agrees to help her look for her dad, she thinks that she needs some closure.

Christina thinks that she made a mistake cutting off Willie, but before she goes on another date with him, she thinks she should fill CeeLo in. She video chats with CeeLo and he asks her how tall Willie is and whether he smells nice. Christina says she can’t remember what he smells like, but CeeLo reminds her that if she really liked him she would remember what he smelled like. He says that she shouldn’t let any man named Willie touch her, she tells him to “hush” and hangs up on him.

Torrei heads to Tameka’s office to help her prepare for the 5K, she thinks that Tameka is in over her head. They sit down and Tameka gives her a list of things they need to do, they need to find a t-shirt vendor to donate the shirts for free. They need to find a printing service, promote the race, and find 1100 people to sign up for the 5K.

Christina meets Willie for drinks, it’s the first time they have seen her since their awkward conversation at Tameka’s event. Christina confesses that it is a pattern for her, she constantly sabotages her relationships whenever they start getting serious. Willie says that moving forward he wants them to continue dating. Christina wants him to understand that she and CeeLo are still cool, and they will always be family, Willie says he understands.

Tameka heads in to the radio station to promote her 5K event on the Ricky Smiley show. Before they let her promote her race though, they quiz her on her personal life and joke about her life as an ex. She tells the DJ that she and Usher are “still cool.” She stresses that all of the rumors are not true and she is not crazy, and then tells everyone listening to sign up for the 5K in honor of her son Kile.

Christina heads out with Monyetta and says that she has huge news, she heard that CeeLo is engaged. She asked CeeLo about it, and he told her it wasn’t any of her business. She is crushed and feels deceived, because CeeLo says they are always family. She just felt guilty about not telling him that she went on a date with Willie and called him and filled him in, and he didn’t even bother telling her that he is actually engaged.

Sheree picks Toerrei up at her house, and they head to Madison Georgia in hopes of finding Sheree’s long lost dad. On the way there Sheree says that she hopes that she knocks on the door and her dad opens the door. They finally arrive in Madison, which is a super small town where everyone knows everyone. They stop at a gas station to fill their tank and grab some snacks. The cashier tells them that someone related to Sheree’s dad owns the gast station down the street and they decide to head there. While they are on the way Sheree says that she is scared they might tell her that her dad is dead.

They arrive at the gas station and Sheree meets her cousin Cornelius, he reveals to her that her father passed away a year ago. Then her cousin Cornelius says he is mixed up, his other uncle died, and her dad is still alive. Sheree is relieved he is still alive, Cornelius says that her dad is very sick though and if she wants to see him she should do it soon. According to Cornelius, her dad moved back to Kentucky. Sheree’s mom lives in Kentucky, so Sheree gives her a call and tells her that her dad moved back home and he is supposedly really sick. Sheree breaks down crying and her mom tries to comfort her on the phone. She feels guilty that she let so much time go by without finding her dad.