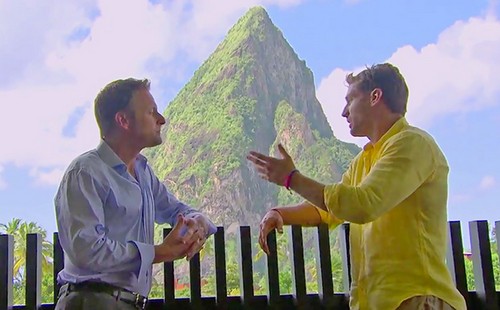 Seriously, is Juan Pablo the most hated Bachelor ever? The contestants hate him, the fans hate him, other Bachelor alumni hate him, celebrities hate him, and even the ‘winner’ of the show, Nikki Ferrell, hates him.

Everyone took to Twitter to comment on the show’s finale, including both the show’s alumni as well as other celebrities – and nobody’s comments were positive. Last year’s Bachelor Sean Lowe wrote, “JP lives with his foot in his mouth. #TheBachelor.”

David Spade wrote what was probably the most accurate comment of the night, tweeting, “I dont know whos dumber. The bachelor, or the girl he picked that he doesnt really like #TheBachelor.” Zach Braff, meanwhile, joked about Juan’s propensity to sleep around, tweeting, “Missed the end of the Bachelor. Did they all get tested? #dirtydick.”

Jason Biggs also criticized Juan’s overall creepiness on the show, tweeting, “I can’t believe he whispered ‘let’s get rapey’ in Clare’s ear. #TheBachelor.” And Sarah Hyland added, “I knew from day 1. I HATE #JuanPablo sooo much. I feel awful for every girl, including the one with the final rose.”

Basically, everyone hates Juan Pablo. Really though, I don’t even understand what the ABC brass were thinking when they chose this guy. Didn’t they vet him thoroughly enough? He’s a complete douchebag, in every single way possible. He’s a homophobe, he makes fun of the mentally ill, he sleeps around, he lies, he’s creepy, and he’s just so… awful. And in the end, he deserves every ounce of criticism he’s getting.

Do you agree? We’ve also included the tweets from the rest of the Bachelor alumni below, as well as other celebrities:

J.P. Rosenbaum: “Hey #JotaPe, get yourself a shovel….you’re in deep sh*t #TheBachelor.”

Ashley L. Rosenbaum: “I’m so shocked over this all, I’m tweetless. #TheBachelor.”

Molly Mesnick: “Ugh…I feel so sad abt everything Bachelor tonight. The hate, the tears, the awkwardness. We will talk ALL about this in tomorrows podcast.”

Jillian Harris: “Ugh. I don’t even know what to think about that #bachelor finale. My heart hurts a little for everyone on that season right now.”

Jaclyn Swartz: “Who would you rather: Ben Flananananana or Juan Pabs #TheBachelor.”

Trista Sutter: “And let me be clear…I am by no means confused that JP isn’t in love. I am confused as 2 why being disrespectful & rude are called honest.”

Yvette Nicole Brown: “Didn’t watch #TheBachelor season, just the finale. That #JuanPablo is a JERK! #ImGladIDidntPickHer?! I feel so sorry for the 1 he did pick.”