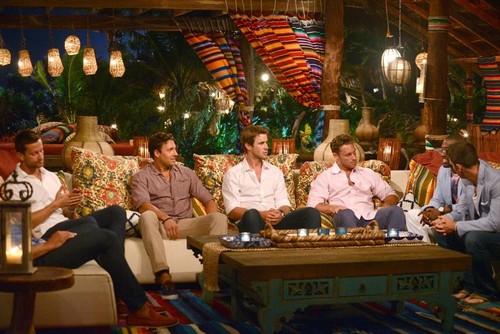 Bachelor in Paradise airs tonight on ABC and in this evening’s episode former contenders from “The Bachelor” continue in paradise as two new bachelorettes arrive and cause romantic complications. Meanwhile, an injury gets in the way of an overnight date.

On the last episode, as the week began, two new bachelors arrived at Papaya Playa Project in Tulum, Mexico with date cards in hand. After feeling like a default choice at the last ceremony, a disheartened Clare was eager to make a romantic connection and was relieved when the first new arrival asked her to be his date. Together, the two headed for a romantic couple massage on the beach. Meanwhile, Lacy and Marcus’ relationship began to blossom as they enjoyed a dreamy dinner date at the exotic eco-archeological park, Xcaret. However, their newfound connection upsetted a jealous Robert, who Lacy invited on a date the week before. For Dylan, having his heart recently broken on “The Bachelorette,” he found that the woman he’s been spending time with, Elise, was moving way too fast. Elise attempted to made him jealous with a new bachelor but her plan backfired. Did you watch the last episode? If you missed it we have a full and detailed recap, right here for you.

On tonight’s episode we return to find the remaining contestants still recovering from a dramatic rose ceremony. The couples are really beginning to bond, but to their surprise, there is already a new bachelorette back at the house waiting for them and she knows exactly what she wants, Marquel. Even though Marquel and Michelle Money seemed to hit it off, this new bachelorette waste no time getting in between the couple, and asking Marquel to accompany her to the historic and charming Hacienda Uayamon in Campeche.

Tonight’s episode of Bachelor in Paradise picks up after last week’s rose ceremony. Elise’s crazy speech rubbed everyone the wrong way. Graham and AshLee gossip about how crazy Elise is. Meanwhile Elise is cuddling with Chris Bukowski, and apparently has already forgot about Dylan, and now she is convinced that she is falling in love with Chris Bukowski.

When they arrive back at the house, they find Danielle Ronco (from Juan Pablo’s season) waiting for them. And, of course she came with a date card. Danielle is nervous about choosing a guy, she doesn’t want to step on any of the other girls’ toes. Michelle encourages Danielle to just pick any guy and not worry about what they think, but it backfires and Danielle asks Marquel out on a date. Michelle is devastated when Marquel says “yes.”

Danielle and Marquel leave for their date, and board a private plane. Meanwhile back at the beach, Michelle is chatting with Graham, she reveals that she is “done with Marquel.” She regrets choosing to give her rose to him over Robert, and if she had to choose again, she would definitely choose Robert. Graham goes back to Robert, who is really confused about why Michelle didn’t give him a rose. Michelle sits down with Clare and Clare reassures her that Robert likes her.

Another date card arrives, and it is for Elise. She runs to go ask Chris out on the date with her. While Elise is getting ready for the date, Chris pops his knee while he is walking through the sand and he can’t stand on it. The medic wraps his knee with an ice pack and tells him that he has to stay off his knee.

Marquelle and Danielle arrive in Campeche, Mexico and begin exploring an old castle, which happens have to have a private pool. Danielle confesses to Marquelle that the reason she came on the show was because Marquelle would be there and she had a crush on him when she watched Andi’s season. Danielle thinks that they might actually have some chemistry, and their date is going great, but a crazy storm comes and they have to rush out of the pool and to shelter.

Michelle helps Elise get ready for her date, she still has no idea that Chris hurt his knee. He decides that he is going to tough it out and go on the date with Elise anyways. Outside everyone is gossiping about Elise and Chris, they are having an overnight date, so they are taking bets on whether or not Elise is going to sleep with him. Chris and Elise head to the airport and board a private plane.

Michelle and Clare decide to have a romantic double dinner date with Robert and Zak. Michelle warns Sarah that she is pursuing Robert, because she knows that Sarah likes him too. Sarah heads outside to pout, and Robert sits down with her. He has no idea that she is upset over his double date, because Michelle hasn’t invited him yet.

Elise and Chris finish their dinner, and get the two keys to their hotel rooms. Chris wants them to share a room though, and after making out in the pool for a while Elise agrees and they head up to the suite. Chris’s knee still hurts, but he is sure he can “make it happen.”

Michelle and Robert head out on their double date with Clare and Zack. Michelle takes Robert aside and tells him how much she likes him, and that she is done with Marquel. Meanwhile back at the house Sarah is crying because everyone is in a couple but her, and she thinks Michelle is more confident and beautiful than her, and now she doesn’t stand a chance with Robert.

Marquel and Danielle return home form their date, but Michelle couldn’t care less, she is over Marquel’s games and is ready to start building a relationship with Robert. They all head down to the beach and have a few drinks, and they see another woman arriving. Michelle is surprised to see Jackie (from Sean’s season), she jumps up and greets her, but secretly wishes she wasn’t there. Michelle invites Marquel to go on a date with her in the morning, and Marquel happily accepts, despite the fact that he just got back from a date with Danielle.

The next morning Marquel and Jackie head out on their date, and head to the airport. Danielle watches them leave, devastated. She can’t believe Marquel went out on another date with Jackie, and she is stressed that no one will give her a rose at the rose ceremony. Graham and Michelle go for a walk on the beach, and Graham rants about how frustrated he is with AshLee. They haven’t even gone on a date yet, and she is already talking about introducing him to her dad. AshLee receives her first date card, and rushes down to the beach to invite Graham to go with her.

Marquel and Jackie are enjoying their date, and hiking through Mayan ruins. Marquel confesses that he never kisses on the first date, but he decides to kiss Jackie. Elise and Chris head to the hospital after their date and Chris learns that he sprained his ACL and MCL. They head back to the house, with Chris on crutches, and Elise gets him ice and takes care of him. She is excited that he hurt his knee because it is giving her a chance to show how much she likes him and she says she thinks they are going to be together forever. Meanwhile Danielle is laying around the house, feelings sorry for herself because Marquel ditches her and went out on a date with Jackie.

Sarah is watching Elise take care of Chris, and she is worried about her because she falls too hard. Elise sits down, and Sarah confronts her about falling for Dylan and Chris literally within two weeks. Elise doesn’t want to hear it though, she says she doesn’t care if she gets hurt. Sarah thinks she is nuts, she was just heartbroken two days ago over Dylan.

Clare heads out to the beach and lays down with Zack and cuddles. She misses her family, tomorrow is the anniversary of her Dad’s death and she wishes she was home with her family during the anniversary. She cries to Zack and he comforts her, and she thinks him for stepping up and being there for her. Their moment is interrupted by a huge sea turtle laying its eggs in the sand right next to them.

In Campeche, AshLee and Graham head out on their date. As they sit down for dinner, AshLee begins gushing about how she came on the show just to meet him, and she has been following him on Instagram. Graham tells her that they just need to get to know each other, and focus on right now, and not “forever.” The waiter delivers them a card from Chris Harrison with two room keys. Graham makes it very clear that he thinks they should sleep in separate rooms tonight. After dinner they dance outside to the mariachi band and share a kiss, then they head to their separate rooms.

It’s time for the next rose ceremony. All of the guys and girls gather for the cocktail party. The guys are a little late for the party because they have to practically carry Chris down the beach, because he can’t walk in the sand. Chris confesses to Michelle that he is considering leaving paradise because he is in so much pain.

Chris Harrison arrives and it is time for the rose ceremony. Graham gives his rose to AshLee. Zack gives his rose to Clare. Marcus gives his rose to Lacy. Marquel gives his rose to Jackie. Robert gives his rose to Sarah. Chris calls Elise down and tells her that he can’t give her his rose, but he really likes her and wants her to go home with him because he is too hurt to stay. Elise accepts his offer and agrees to leave with him. Before Chris leaves, he says that there is one person in paradise who he believes deserves true love, and he wants Michelle to have his rose and stay in paradise. Michelle cries that he is so sweet and takes the rose and hugs Chris and Elise good-bye.