Bachelorette 2014 Spoilers: Andi Dorfman and Producers Staged Fantasy Suite Break-Up With Juan Pablo So She Could Be Next Bachelorette 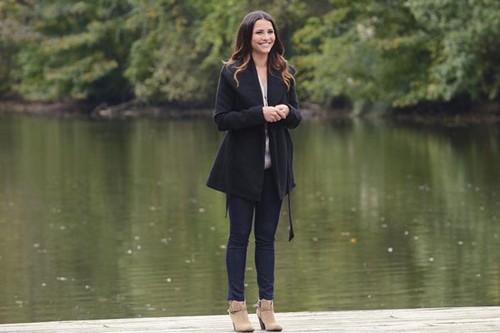 Everybody would be shocked if Andi Dorfman wasn’t revealed as the 2014 Bachelorette, Bachelor Nation appears to be pretty unanimous that she has been the lucky woman to carry on the Bachelor tradition in her own spin-off. You have to admit though, her break-up with Juan Pablo was really convenient. If she hadn’t ditched him after her Fantasy Suite date, then he may have chosen her for the Final Two, and then her chances of being the next Bachelorette would have been shot.

Andi Dorfman appeared to be smitten with Juan Pablo after her home-town date. Then, everything came to a screeching halt after she spent the night talking to Juan Pablo in the Fantasy Suite, and realized he was arrogant, cocky, and inconsiderate. It seems suspicious that Andi traveled around the world with Juan Pablo for weeks, and appeared completely clueless that he was any of those things until the Fantasy Suite date.

We all realized it by the second episode of The Bachelor, it’s doubtful Andi didn’t pick up on it until the Fantasy Suite date. Also, the morning after Andi’s Fantasy Suite date, Juan Pablo gushed about how well it went, completely clueless that Andi was upset. Juan Pablo brought up a good point in interviews after the Fantasy Suite date aired, as much as I hate to admit this. If Andi was so upset during the Suite date, why didn’t she mention it while the cameras were off and air her concerns while they were in the room privately? Why wait until the next morning to bombard him with the news on camera and stage a very public break-up?

Nobody disagrees with Andi Dorfman, Juan Pablo is all of the things she said he was when she dumped him. But, you have to admit it is pretty convenient that she was perfectly okay with Juan Pablo’s arrogance, harsh honesty, and language barrier issues, until she realized she had an opportunity to be the next Bachelorette and could find somebody better.

So Bachelor fans, do you think the Bachelor producers took Andi Dorfman aside and offered her the position as the next Bachelorette if she dumped Juan Pablo before the finale? (Not that we really blame her.) You have to admit it, her sudden change of heart about Juan Pablo was really conveniently timed, and came out of nowhere. Do you think Andi Dorfman would have stuck it out with Juan Pablo, if she wasn’t given the opportunity to be the 2014 Bachelorette?