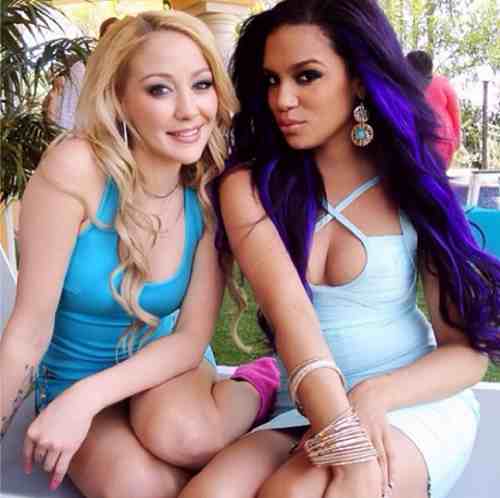 For those of you who aren’t familiar with the show, this season, the best of the bad move into a LA mansion, ready to ride the rocky road to change, while making new friends and facing off with old enemies along the way. Life coach Laura returns to help each girl empower themselves, curb their temper and reach their personal goals and aspirations, but will old habits die hard or will these alpha females be ready to change for the better?

On tonight’s episode nine feisty BGC All-Stars are back and ready to change for the better, but wild child Judi proves that old habits die hard. Expect the ladies to confront some personal issues very publicly as each girl’s family pays a visit. For non-traditional décor, the hallways of the mansion are lined with pics of the ladies with their families and friends. The mansion provides the perfect backdrop for the ladies to try to work on their personal issues, manager their anger, and tame their wild ways.

Tonight’s episode of Bad Girls Club is going to be filled with drama and you won’t want to miss it, so be sure to tune in for our live coverage of the show tonight at 8 PM EST!

Camilla wants to change for the better. “I’m always looking to change,” she says. She loves the house, and immediately picks her bed before anyone else even arrives.

Julie reflects how she was known on her season as an evil schemer., causing all the drama in the house and getting beat down at the reunion. She hopes she can change so she can make lifelong friends.

“I’m ready to drink, duh,” Judi says. On her season in New Orleans, she ‘used alcohol as a defense mechanism.’ She also gained weight. She wants people to get to know the fun Jodi. She also wants to stop being such a party girl so she can settle down and make her family proud. “I really hope that Natalie is not in this house ‘cause we have so much beef,” Judi says.

Sarah regrets making everyone want to fight and jump her during her season. She wants to work, be about her business and change, not let people take advantage of her, and improve herself.

“Redd in Chicago was known for being a bully,” Redd says of herself on her season. “I do not regret doing anything in my season, whether it was good or bad, because it teaches you.” She acknowledges her attitude problem and trust issues, but jokes about how she still wants attention.

Jada, from the same season as Redd, admits that she is a hothead. “There’s a lot of things I didn’t talk about in Chicago ‘cause I was scared to put my business on the line,” she says. But she also says she is willing to open up and ‘help others be the best bad girl they can be.’

As soon as Jada sees the cutout of Redd and is shocked, but doesn’t want to fight her. She does say though, that “there might be drama” if Redd decides to start something.

Danni, from season 8 in Las Vegas, was really immature and jumped a girl who didn’t deserve it. She admits her loud mouth, patience, attitude and ability to make and keep relationships are major problems.

Redd tells the girls that she is gay. “I would look, but never touch,” she says.

Natalie finally arrives, embarrassed about her past and wants to care more about other people’s feelings. Julie is freaked out by how nice Natalie is.

Everyone goes outside and makes a toast to growing and working on themselves.

Judi breaks down almost immediately, making everyone worried about her emotional and alcohol problems.

Everyone gets on the party bus and heads to the club. Camilla watches Sarah follow Natalie around like a puppy after Natalie had previously been heard saying she doesn’t like her. Camilla says Sarah is fake and a follower, first with her previous comments about black women and now this.

A drunk Judi spills her drink on Danni in the bus. Later, she confronts Natalie for disliking her. Natalie calls her crazy and recalls how she has blocked an “obsessed” Judi online in the past. She tells Judi, “you have got to get it together.”

Judi finds living in the house with Natalie to be nerve wracking, which of course leads her to drink. Judi is also pressed when Julie starts getting friendly with other people in the house and accuses her of being fake and “very easily influenced.”
Julie finds it “a slap in the face” that Judi would attack her when she’s the one who’s always there for her.

The girls go into the city, and when Judi immediately orders a martini at the restaurant, Julie switches seats with [Jada?] to get away from her.

Judi says she ‘feels she can be herself’ when she’s drinking to cope with her problems.

Camilla calls out Sarah once again for the comments about black women, about being a mistress and about being fake.

When they get back to the house, Judi continues to drink.

At the club, with a drink in her hand, Judi tells Danni that everyone is fake, but Danni is sick of it and goes off to dance. She tells Sarah about it and Sarah goes to confront Judi. Julie gets frustrated with her inability to take advice and walks away.

When they get back, Redd confronts Judi about her psychological problems. “... I see a person crying out for help,” she says. She admonishes Judi for talking to her friends the way she has. She starts screaming at her to put the cup down, talking about how she had kids to take care of.

In the bedroom, Danni tells Judy that she’s acting like a ‘psycho three year old.’ Judi tells her she has gotten so much crap for being friends with them and Danni says ‘don’t be friends with me then!’

“You and me are never going to be cool again,” Danni tells her, kicking her out of the room.

Judi moves her pillows and blankets to the living room, calling it a slap in the face that her friends kicked her out of the room. She calls the sleeping situation “temporary” and says ‘anything can happen in the morning.’