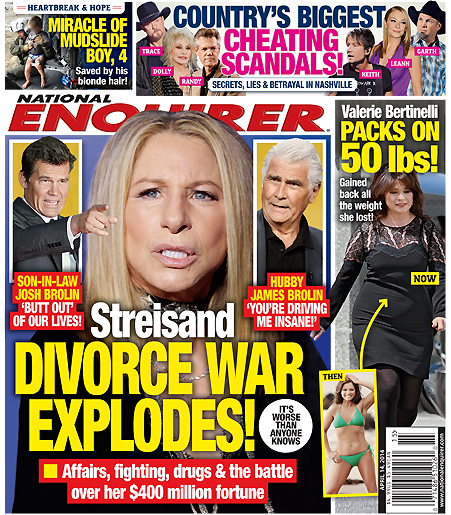 The National Enquirer continues to insist that Barbra Streisand‘s marriage to James Brolin is in trouble, despite the fact that they are one of Hollywood’s longest lasting marriages at this point. According to the latest cover issue of the Enquirer, Barbra’s husband and family are resenting her involvement in their lives, with hubby James reportedly telling her, ‘You’re driving me insane!’

The report also alleges that Josh Brolin, Barbra’s son-in-law and famous Hollywood actor, reportedly told Barbra to butt out of their lives.

Basically, it all boils down to her family fighting against her, and the cover also claims that drugs and affairs are involved. There have been previous allegations of James Brolin’s drug use, which wouldn’t be much of a surprise considering Josh Brolin managed to hide his own dependence on drugs and alcohol for a very long time. Hollywood does that to people.

And then, there are the ‘affairs’. The Enquirer in the past has claimed that Streisand has had affairs with Bill Clinton and Prince Charles, so we know how reliable they are. And of course, there are the rumors of James’ constant cheating. Thus, the Enquirer claims that Barbra and James have been fighting constantly, and they’re getting to the stage in their marriage that they can’t stand the sight of each other – and thus, the battle over Barbra’s $400 million fortune.

I really don’t know how long that would last because James also happens to have a lot of money. That $400 million isn’t a figure that is often thrown around, but I doubt a divorce would ever involve all of Barbra’s money like that.

The Enquirer’s cover also has a featured story on Valerie Bertinelli‘s fifty pound weight gain, and then another feature on country music’s biggest cheating scandals. These include the infamous LeAnn Rimes and Eddie Cibrian affair, plus other famous country stars such as Keith Urban and Garth Brooks.