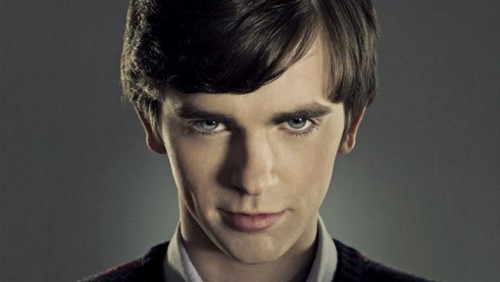 Bates Motel returns to A&E tonight with a brand new episode for fans to enjoy. In “Meltdown,” Romero continues to investigate Miss Watson’s murder. Meanwhile, Dylan is presented with a difficult choice; and Norman pushes Norma away.

On last week’s episode Zane threatened Dylan; Norman questioned Norma’s faith in him when she thought that he blacked out when he accidentally killed Cody’s father when in fact it happened because Norman was trying to protect Cody.  Did you watch last week’s episode?  We did and we have a full and detailed recap right here, for you.

On tonight’s episode Romero digs for the truth behind Miss Watson’s murder, while the war between the drug families presents Dylan with an impossible choice. Norman pushes Norma away when she won’t tell him the truth about his blackouts.

Tonight’s episode of Bates Motel begins with Norman cleaning the motel bright and early in the morning, Norma is frantically searching for him when she realizes he isn’t in bed. Sherriff Romero heads into the office to pour a cup of coffee and watches Norman over his shoulder. Norman asks if anything is wrong, but Romero denies there are any problems. Norma arrives at the motel office and invites Norman to go on a mother-son date with her tonight. Norman turns her down and heads back to the house.

Norma tries to chase after Norman but Nick arrives and shuts her in the office with him. He says he wants her to do him a favor. Nick wants Norma to arrange a meeting between him and Dylan, since they are in the same business. Norma tries to tell Nick that she doesn’t really talk to Dylan, Nick advises her to “do it right away.”

Dylan wakes up in the woods to the sound of police sirens. Cops are arriving at the warehouse that Zane and Remo shot up the night before. Dylan makes his way through the woods undetected by the cops. He heads straight to Jodie’s house and barges in and tells her that her brother is “out of his mind” and that he raided the Ford warehouse last night.

Jodie calls Zane out in her kitchen. Zane insists that he has a plan, he wants to take over Ford’s business and “run the whole damn town.” Jodie and Dylan tell him to “go somewhere and lay low.”

Norma is trying to track down Dylan, Emma shows her where he works. Remo lets Norma in and takes her to Dylan’s office. Norma explains to him that Nick Ford helped her and now he wants a favor from her. Dylan says there is no way he can meet with him, Nick Ford is going to put a bullet in his head and explains that he is the leader of their rival drug family. He has Remo walk her out of the building, and tells Norma to stay away from Nick Ford.

George pays Norma a visit and announces that the bi-lass has been halted for environmental research. He tells Norma he wants to be more than friends and invites her to come over to his house for a dinner date, Norma accepts the invite.

Sherriff Romero has his deputies searching the town looking for Zane, they have looked high and low and can’t find him.

Dylan is driving down the road in the middle of the night and he gets pulled over by Romero. He tells Dylan to get out of the car, and asks him “where the hell is Zane Morgan?” Dylan says he has no idea. Romero slams him against his car and tells him is he finds out where he is to call him and if he finds out he is lying he will kill him.

Norma heads downstairs and finds Norman placing creepy stuffed taxidermy birds all over the house. She tries to tell them they “don’t really go.” But, Norman doesn’t want to hear it.

Sherriff Romero knocks on her door. He says he needs Norman’s help to hang the shower curtain up in his room, he broke the rod. Norman heads to Romero’s room with him to help him hang up the shower curtain rod. Romero tries to nonchalantly question Norman about Blaire Watson, the dead woman who was raped. When Norman was processed at the police station last episode his DNA was a match for the semen found inside Blaire when she was murdered. Norman says that Blaire was a good teacher, but sometimes she seemed sad and lost. Romero asks Norman if he ever slept with her. Norman denies it and storms out.

The next day Nick Ford arrives at Norma’s house. Norman answers the door and says that she isn’t home. Nick says he will wait inside for her and Norman shows him the living-room. Nick asks Norman why he was taking photos of him at his daughter Blaire’s grave. Norman says he was trying to figure out who killed Ms. Watson, and thought that Nick might be a suspect.

Norma returns home and finds Nick in the living-room. She tells him that she couldn’t find Dylan and he wouldn’t talk to her. Nick reveals to Norma that he was responsible for Lee’s death and got her the seat on the City Council. Norma tells Nick to get out and threatens to call Sherriff Romero. Norman hides around the corner and listens in on their conversation.

Norma gets dessed and tells Norman she is going to George’s house for dinner. He tells her he won’t wait up for her.

Dylan calls Nick and tells him he will meet him some place public and out of town. They agree to meet at a pizza place in Oceanview at 8:00 PM.

Norma arrives at George’s house where he is cooking steak for dinner, he catches her in a lie about where she went to college. She reveals that this was a mistake and she lied about going to college and her family. She begins crying and storms out of his house and hops in her car.

Dylan arrives at the pizza place and Nick is waiting for him at a table. Nick tells Dylan that they have a mutual problem…Zane Morgan. He tells Dylan to kill Zane and “all of this stops right here.” If Dylan doesn’t kill Zane, then Nick will retaliate for the warehouse raid and they will have a full-fledged drug war on their hands. Dylan tells Nick to “stay the hell away from his mother” and then storms out of the pizza place.

Norma arrives home and tries to talk to Norman. She tells him that he is “being a dick about something that isn’t her fault.” She is tired of him being distant from her, he reminds her that she is the one keeping secrets from him. Norman storms off and says that he “doesn’t trust her anymore.” He grabs her arms and tells her “that it was all just a game that they were devotes to each other and loves each other.” Norma cries that they do love each other. Norman announces he is going to his room and instructs her not to follow him. She bangs on his bedroom door but he has locked her out. Norma tells him “fine be alone,” and then runs out the door and drives back to George’s house.

Norma knocks on the door and George opens it. She barges in and begins kissing him. She takes her underwear off underneath her dress before she is barely through the door.

Dylan heads to Jodie’s house, he tells her that she needs to stop Nick Ford because he isn’t going to go away, she can’t ignore this. He reminds her that both of their lives are at stake and Nick Ford isn’t going to stop until their entire operation is dead. Jodie cries and tells Dylan, “If you need to do something about Zane you can do it.”

Norman is closing the motel office. Romero stops him and tells him that Carl has been convicted for Blaire’s death, but he needs to know why Norman is lying about having sex with Blaire the night she died. Norman insists he didn’t have sex with her and then runs back to his house. He hides in his room holding Blaire’s obituary and necklace and he hears a noise downstairs. He heads downstairs to inspect the noise and someone grabs him and knocks him out with a rag soaked in chlorophyll.