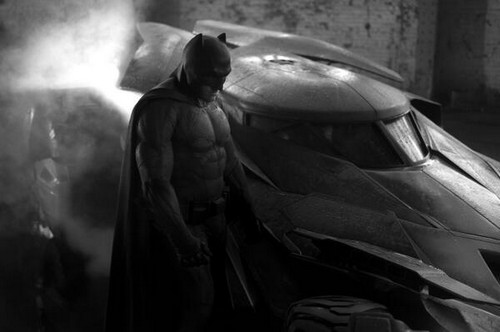 Holy Batsuit, Batman. The first picture of Ben Affleck as Batman [in his batsuit and all] has been published, courtesy of director Zack Snyder‘s Twitter. And um, my first impulse is to laugh. Is that bad?

Look, in my mind, Christian Bale will always be Batman. Always. He managed to capture the gravitas in an inherently dark and sometimes silly character, and he brought a lot of emotional depth to the role. He wasn’t just a hulking mass of a billionaire that used his money and toys to go all vigilante on Gotham City. But when I see this picture of Ben Affleck, that’s not what is coming to my head. Maybe it’s because Ben Affleck’s real-life gambling shenanigans are so ingrained in my head, or maybe it’s because I still can’t buy Ben as Batman.

Plus, there’s the whole thing of.. ahem, Ben gaining a LOT of weight very fast to look like this. Seriously, he looks more jacked that Christian Bale did for the first Batman role, and Bale reportedly took almost a year to put on the pounds of muscle he needed for the role. Ben, on the other hand, has been gambling in Vegas and shooting other roles… and yet, has somehow managed to bulk up even more in less time?

Um, I don’t want to say it out loud, but I know you’re all thinking what I’m thinking. This wouldn’t be the first time an actor used steroids to bulk up for a film role, and it wouldn’t be the last. Obviously, we don’t know for sure that’s what happened here, but Henry Cavill’s trainer claims to have bulked him for Superman all naturally (are steroids natural). So if Ben is using the same trainer, then shouldn’t he go through the same process? Or is there just not enough time? Or maybe Ben feels so much expectation to live up to the character that he decided to do it himself?

Well, maybe this picture is deceiving. We’ll find out for sure once more filming photos release from Batman Vs. Superman, a.k.a. DC comics’ last attempt to create a Justice League movie.