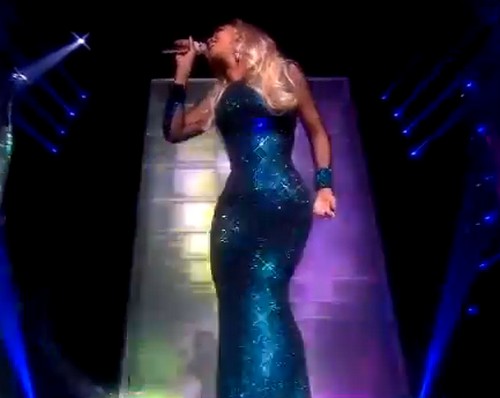 Beyonce apparently didn’t think her jelly was ready to hit the stage and perform at The O2 Arena today in London for the 2014 Brit Awards. Word on the curb is that Beyonce wore butt and hip pads to make her body look more bootylicious for her fans, stans and naysayers. Photographs and video of the “Drunk In Love” singer during her performance appear to confirm that there was definitely something extra going on under that sparkly teal Vrettos Vrettakos dress.

According to Sandra Rose “Every now and then American singer Beyonce will dust off her famed butt pads for one special performance… [Beyonce] wore bulky butt and hip pads to fill out her gorgeous shimmering floor length gown. Much has been made about Beyonce’s drastic weight loss — and don’t think she hasn’t heard the whispers that she has noassatall.” (LOL at “noassatall”) Now there is clearly a little shade being thrown here, and we all know our Atlanta auntie Ms. Rose doesn’t care too much for Queen Bey; yet, there are a few things to consider here.

Beyonce looked noticeably slimmer performing with her hubby Jay-Z at the Grammys. Her stage attire for that sexy performance included a thong, so it is safe to say we got a good look at the goods. To be clear, we over here at CDL thought Mrs. Carter looked great. Her body just appeared more toned. This is where it is important to consider the photographic evidence.

Beyonce was looking thicker than a snicker on stage performing “XO” live for the first time, and she definitely filled out her dress nicely. She was captured seductively bending her body at different stages during the performance and if you look in the hip area, you can clearly see some questionable indentations on her silhouette. She definitely has on some form of fashion contraption to make her body appear a certain way. We all know that the size and appearance of the booty is important within a certain taste and culture. So maybe Beyonce took that into consideration for her performance look at the 2014 Brit Awards. Big Deal.

Honestly if she did wear butt pads, it is more respectable because Beyonce’s body is au natural (note: we didn’t say her face). If you want to be made or hate because padding was part of her costume, you are on your own. At least Beyonce isn’t having her backside injected with fat from some foreign spot on her body like Kim Kardashian or stuffing herself with implants. A little help from padding or spanx is something most women depend on from time to time. The fact that Beyonce does too, makes her seem more down to earth and normal. It’s a light load, but help us wash it out with your thoughts in the comments.