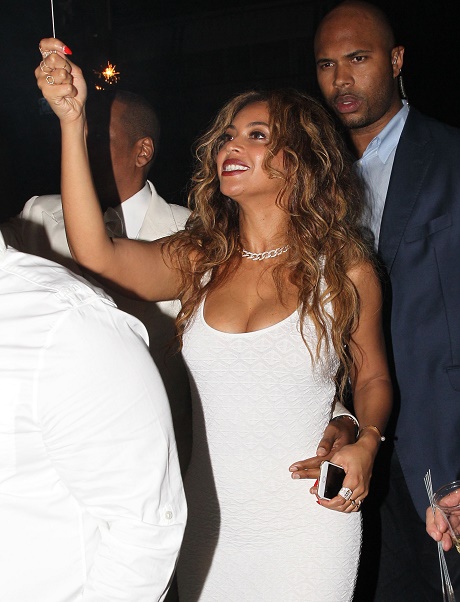 Ever since Solange Knowles’ elevator fight with her hubby Jay-Z, Beyonce has been acting bizarrely, and we aren’t the only ones who have noticed. One of the reasons Bey had legions of diehard fans was because she was such a private celebrity and left a lot to her fan’s imaginations. The fact that she was so mysterious set her apart from other singers and celebrities. But, ever since Beyoncé’s dirty laundry was aired all over the internet in elevator footage, the troubled singer has been the opposite of private and it is beginning to turn her fans off.

So what has Beyoncé been doing that is so out of character? Check her social media pages. Bey managed to record and drop an entire album in secret, now she can’t even get dressed in the morning without snapping a half-naked selfie and posting it on the internet and updating the world on her every move. Beyoncé has gone from private and mysterious to borderline desperate for attention. Is this some sort of compensatory response to Jay-Z’s cheating?

According to the latest edition of OK! Magazine, Beyoncé’s stream of never-ending Instagram photos are just the half of it, and she was recently spotted out and about appearing “out of it” and heavily medicated. The magazine explains, “On November 3rd she was caught looking out of it at a basketball game with Jay, swaying back and forth as if in a trance. Everyone is wondering if she is on medication because it is a shock to see Queen B slipping up like this.”

If you think about it – Beyoncé has had a tough year. After the elevator fight and cheating scandal, there have been rumors of a divorce and split for months, on top of that Jay-Z dragged her on tour with him to try and repair their images, and the televised tour’s ratings turned out to be a flop.

Frankly, we would be shocked if Beyoncé wasn’t heavily medicated by now. What do you think of Beyonce’s bizarre social media behavior and strange appearance at the basketball game? Is she on medication because the anxiety of a divorce is just too much to handle? Is the medication causing her to act impulsively and post half-naked pictures on Instagram? Let us know what you think in the comments below!