Beyonce Divorce Back On: Jay-Z Break Up – Bodyguard Reveals Jay-Z Cheating With Other Woman (PHOTO) 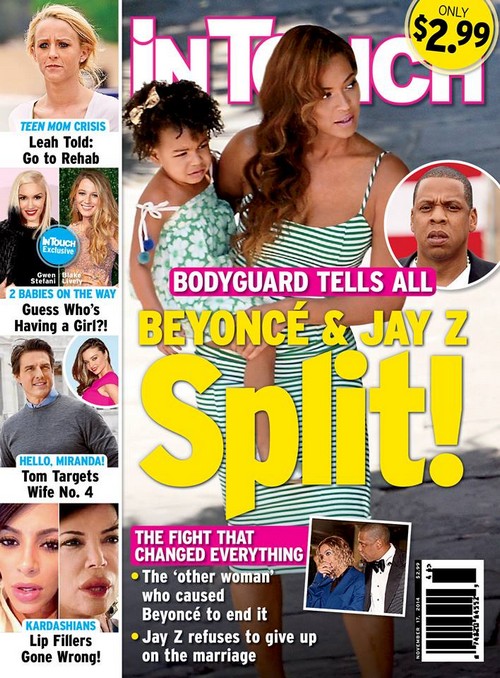 Beyonce and her hubby Jay-Z just can’t catch a break. No matter how hard they try to counteract their rumored split, divorce and break-up, new sources just keep popping up. After the elevator incident and Beyonce’s sister Solange assaulted Jay-Z for cheating on her, the writing is on the wall. But, Jay-Z and Beyonce have desperately tried to repair their image, even hinted that Bey is pregnant, and went on tour together to spread their happy marriage propaganda across the country.

The November 17th edition of In Touch magazine puts Beyonce and Jazy-Z back to square one – they’re going to have to go on tour together for another five years to repair the damage that the tabloid’s latest report has done to their image. The cover of this week’s magazine screams, “Bodyguard Tells All – Beyonce & Jay-Z Split.” In Touch goes on to explain, “The fight that changed everything: the “other” woman who caused Beyonce to end it, Jay-Z refuses to give up on their marriage.”

When you take in to consideration all of the divorce rumors, tabloid covers like In Touch, and Jay-Z and Beyonce’s avoidance of the topic, it makes it nearly impossible to determine what is really going on with the power couple. But, In Touch’s cover can’t be that far off. We know Jay-Z was allegedly cheating with another woman and that was what spurred his elevator fight with Solange. And, Jay-Z obviously doesn’t want to split and their marriage to end, that’s why he booked them a tour together and filmed behind the scenes to create a “Jay-Z & Beyonce Movie.”

The November 17th cover of In Touch Magazine also teases another scandalous story on Teen Mom 2’s Leah Messer, who is reportedly being forced to go to rehab. Apparently she borrowed a page out of her co-star Jenelle Evan’s playbook. Tom Cruise is on the prowl for wife number four. And, the tabloid also teases an amazing photo spread of the Kardashian Family’s “lip fillers gone wrong.” (Which we can see on Instagram every day for free.)

So, what do you think of the latest report on Beyonce and Jay-Z splitting up? Are you buying it or is In Touch just trying to sell more magazines? Can you picture Jay-Z cheating on Beyonce? Let us know what you think in the comments below!