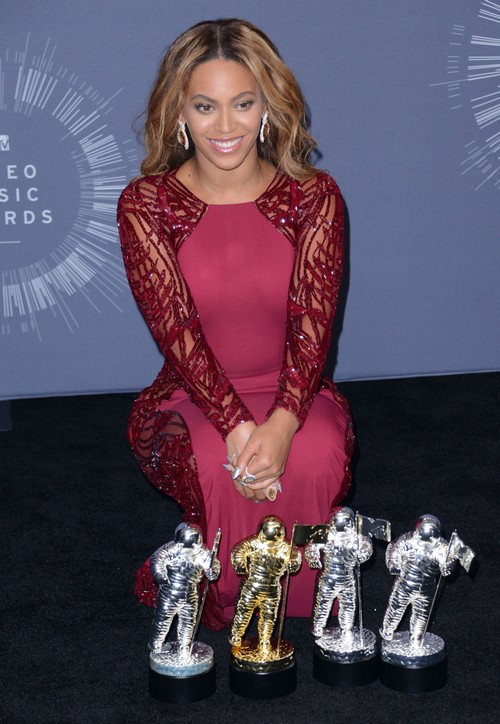 Beyonce and Jay-Z pulled out all the stops to quell divorce rumors during the VMA Awards on Sunday, August 24, even bringing Blue Ivy on stage when Beyonce won the Video Vanguard award. However, their publicity stunt hasn’t made a lick of difference to the public or the media. Nobody buys the BS that Beyonce and Jay-Z put out on Sunday that they are a happy family and that divorce is off the table. They kissed and hugged and pretended to be one happy family, but we already know Beyonce and Jay-Z are experts at manipulating the media. The only difference is that this time, the public knows exactly what they’re doing.

Besides, we know that Jay-Z banned Solange from Beyonce’s dressing room at the awards, and Beyonce and Solange kept their distance during the red carpets and awards. Surprising? Well, just a few weeks ago, Beyonce was pretending as though everything was wonderful between her, her sister, and her ‘husband’. But now, they’re ignoring each other at such a big event? Yeah, I have a feeling Jay-Z gave Beyonce an ultimatum – either Solange, or him. And Beyonce clearly picked him, even if their reunion already has an expiration date.

Let’s be real – how much longer are they going to pull this charade with us? There has to be some sort of goal that Beyonce is trying to achieve. Could it be that she’s the one who doesn’t want to get divorced? Whatever her reasons are, she’s actually trying her best to make the public think that everything’s fine and dandy in her marriage. But we know the truth, and to be honest, their VMA stunt was very hard to believe. Jay-Z did not look at ALL into Bey’s kiss, and actually, he looked like he wanted to be anywhere else in the world but there.