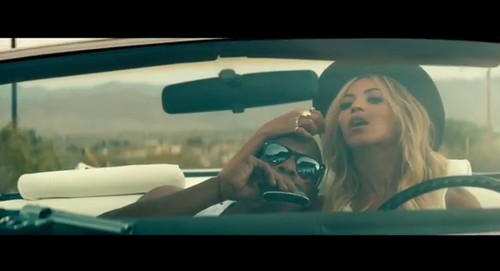 After watching Jay-Z and Beyonce’s star studded new video for Run I’m starting to really understand why they didn’t speak out denouncing the violent elevator encounter that we all saw last week. It was pretty tame compared to their new video which features Bey and Jay as bank robbers on the run. Sure Run is filled with A-list actors such as Sean Penn, Blake Lively, Don Cheadle and Jake Gyllenhaal but it is also loaded with gangsta style violence. It ends with Bey in a police line up covered in blood trying to look really hard. My guess is that this is the kind of image she is preferring these days. Straight hood but with million dollar security to protect her.

It makes sense that they would drop a new video now in an attempt to make people forget about that surveillance tape and redirect them back towards the careers that have made both Bey and Jay a household name. The problem is that what they are offering up is more violence. At what point do we stop thinking of them as such a class act (editor’s note – they have never been a class act) and start basing our opinions on what they are showing us now? Because right now what I’ve been told is that it’s okay to beat on a family member behind closed doors and that violence is a way to handle things as long as you hide it from everyone else.

It’s also interesting that with all the creative tools imaginable these two opted to show us Bey firing weapons while Jay makes back-room deals in a strip club, drinks while driving in a car, running from police, high speed auto evasion of police, and more activities associated with violent crime – nice! Perhaps that ‘class act’ that has been welcomed at The White House is really just that – an act. Are you a fan of Bey and Jay’s new Run video? Do you think that they have been treated differently in the last week that any other couple would have been in their shoes? Tell us your thoughts in the comments below!