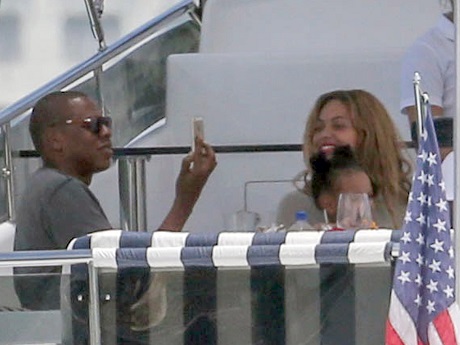 Beyonce hates Kim Kardashian. Does anybody doubt this? Beyonce has made this abundantly clear every single chance she gets, including awards shows and public events. Beyonce didn’t even let Jay-Z attend Kim’s wedding to Kanye West, despite the fact that Kanye is one of his best friends. That shows you just how much she detests Kim.

It also explains why Blue Ivy and North West, despite being around the same age and two of their parents being BFFs, never hang out together. Beyonce simply won’t let Blue Ivy become friends with North, knowing full well that Kim would just use North as an excuse to get closer to her. Beyonce literally doesn’t want any contact with Kim, whether it be through her husband, through Kanye, or through her kid.

OK! Magazine’s new report even suggests that Beyonce suffered through meetings with Kim with her ‘teeth gritted‘, explaining, “Bey and Jay feel like they’ve been dragged through the mud with all the drama surrounding their absence at the Kimye wedding. Jay made it clear to Kanye that he doesn’t approve of the choices hes making in his personal life and it will end in disaster for his career.”

Yeah, I can totally see Jay-Z sitting Kanye down and telling him to ditch Kim. I can also see Kanye freaking out at Jay-Z and being all, ‘But I love her man!’ We’ll see how long that ‘love’ lasts, Kanye. Just wait till Kim becomes irrelevant in mainstream media, and you stop touring because she forces you to stay home while she desperately tries to recapture the glory days of her fame.