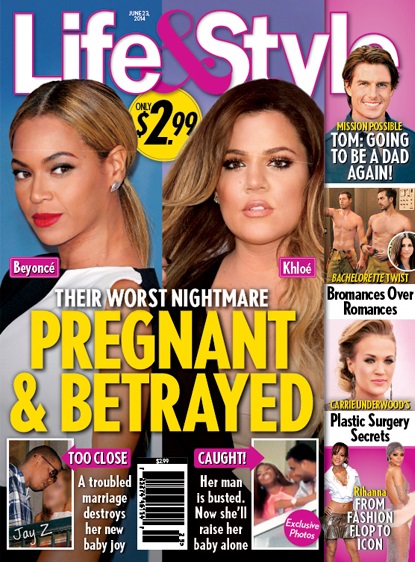 Well, now maybe Beyonce‘s willingness to stay with a husband who clearly likes to mess around and cheat is starting to make a tiny bit more sense. There have been some rumors swirling that Bey could be expecting another child and, for awhile there, she seemed to be dropping hints about adding to the family.

According to the June 23rd print edition of Life & Style, Beyonce is indeed pregnant and it’s a little detail that has made her think very carefully about how to handle that little rumor about Jay-Z cheating with Rachel Roy (and Rita Ora and Rihanna and…). Apparently, Bey was thrilled for a hot minute about this pregnancy — but now she is feeling more than a little trapped and obligated to try and work through the mess and shade that inevitably goes with being Jay’s wifey.

Could Khloe Kardashian also be pregnant? According to the new issue of Life & Style, she actually is carrying rapper boyfriend French Montana’s child, which is creating quite a problem. While Khloe was off in Europe celebrating her sister Kim Kardashian’s marriage to Kanye West, French was getting up close and personal with some random model — and it was all caught on camera. Khloe was none too thrilled to return home to see the photos and while motherhood has been the one thing she’s wanted most, this is exactly how she saw it happening.

Speaking of parenthood, can you imagine Tom Cruise having another kid? Rumor has it that it could actually be in the actor’s plans…but who would his baby mama be?