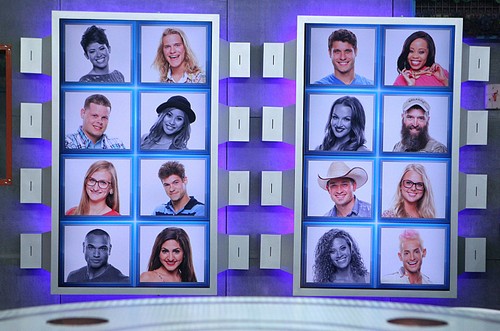 Tonight on CBS BIG BROTHER continues with another new episode and on tonight’s show “The Power of Veto” competition is held.

On the last episode, Donny and Nicole won Head of Household and during the Nomination Ceremony, Nicole nominated Jocasta and Zach, Donny nominates Caleb and Victoria. During the Battle of the Block competition Caleb and Victoria win, Donny is ousted as the HOH. Caleb and Victoria have to do the three punishments as part of their win; they are on slop for two weeks, one of them has to shave the other’s head and in the “Adam and Eve” punishment they have to wear fig leaf bathing suits for 48 hours and be chained together. Did you watch the last episode? If you missed it we have a full and detailed recap, right here for you.

On tonight’s show the Power of Veto competition is held and we will find out if the winner uses it.  If you want to find out what was going to go down tonight before the show tonight, check our our nifty spoilers.

It’s day 43 of #BB16. Zach is annoyed that he lost the challenge to Victoria but is focused on winning POV this week. He says it’s huge. Jocasta is also determined to win POV and is aggravated to be on the block yet again. Caleb is irritated that his head has to be shaved and that he has to be chained to Victoria. Frankie says he’ll still want to have sex with him.

Victoria and Nicole do a happy dance. Nicole is the first female HOH to survive. She reveals that Frankie is her real target. Caleb eyes Zach’s chicken pot pie – he’s stuck with slop. Caleb moans and says it will take two months for his hair to grow out but Zach is annoyed by his whining since he’s still on the block. In his confessional, he calls Caleb a roster of names.

Frankie hangs out with Nicole in the HOH room and he asks what she wants to happen. She says she wants Zach to go. Frankie says people are on board for that. She thinks Frankie is feeling her out for information and is acting buddy-buddy but she doesn’t think she can trust him. Frankie tells her that soon it will be all out war and he can smell the blood in the water.

Nicole tells the camera she hopes it’s his blood on her hands by the end of the week. Victoria and Caleb are called to the diary room. Frankie laughs because he thinks they are going to hate being chained together. They come back out. Caleb is in a leaf Speedo and Victoria in a leaf bikini and they are attached at the wrist. Victoria is annoyed because he won’t let her moisturize.

They head off to the bathroom. She gets them tangled and then has to stand outside the door while he goes. Victoria next shaves Caleb’s hair off while everyone watches. Frankie thinks it’s sexy because Caleb has his head down into her chest while she does the back of his head. He doesn’t look bad – it’s a tight buzz, not 100% shaved off. He isn’t happy though.

Derrick thinks about the possible alliance with Nicole. He comes to see her with Cody so she will know they are on board with Hayden. They discuss getting Frankie off. Derrick and Cody are now in three alliances and he’s worried if Frankie goes home, they will be revealed. Hayden says he trusts them all and can start making power moves and vote people out.

Hayden talks about #Quadropolis and suggests they call themselves #TheRationale as an alliance name. Ick. Nicole chats with Christine. Christine wants Zach to go home since he’s in her alliance and put them up. But they don’t know that Zach is nearby and listening in. Christine suggests Derrick or Cody as alternate people. Christine tells her that Hayden wants Zach to stay

She tells her Hayden and Victoria have been talking and were making out. Christine says it grosses her out. She’s trying to sew seeds of doubt in Nicole’s mind. Hayden comes in and Nicole tells her that Christine wants Cody or Derrick out and the gossip about him making out with Victoria. Hayden says it 100% didn’t happen and he tells her to put Christine up

Hayden laughs later that Christine said she was disgusted with him making out with Victoria which didn’t even happen. Nicole thinks Christine is playing a dumb game trying to manipulate her. Hayden says she’s the worst. Nicole is now thinking about focusing on Christine instead of Frankie. Hayden says Christine thinks that she herself is the smartest player in the house.

Nicole tells Cody that Christine wants her to put up him or Derrick. Nicole thinks they have to limit info to Christine and keep an eye on her because they can’t trust her anymore. The guys agree. Cody tells Derrick about what Christine is up to and they wonder who she’s working with. Derrick asks what to do and they agree that Frankie should go home.

Nicole calls everyone to pick players for the veto competition. Nicole says six people will participate, the HOH, two nominees and three others picked randomly. She hopes they can either get Frankie or Christine out. Zach and Jocasta come up and then Nicole picks the first name – it’s Caleb. Zach hopes Donny won’t get picked. He draws Christine. Jocasta draws Victoria.

Nicole is upset that none of the players she wanted got picked. Zach says if he doesn’t win this they can call him the biggest fruit loop dingus in BB history. Everyone heads off. Caleb and Victoria are grabbing breakfast and he says this is the worst 48 hours of his life. He’s hungry, annoyed and tired of watching Victoria deal with her makeup and primping.

He’s aggravated when she doesn’t want him to play pool. Later he chills out and says it’s pretty cool to play Adam and Eve and says she’s a good partner. Then later Caleb says she’s annoying. Frankie wants to get the Detonators together to talk. Frankie, Zach, Cody, Derrick and Christine get together. Derrick is happy that the others are clueless about his side deal with The Rationale.

Frankie calls everyone for the Veto Competition. It will be played one at a time. He sends everyone off to separate rooms. He tells Caleb and Victoria they can unhook for the competition. He wishes them all luck and they head off. Nicole heads outside for her turn. There is a comic book themed challenge with art on each of the contestants.

She has to hit a clock, zip line through the comic studio then grab comic books from her bin. When she thinks she has the same ones, she hits a button. The person that has the fastest time wins. She starts. There’s a window to zipline by that offers a limited and rapid view. She sees The Beard (aka Donny) and then notices duplicate covers that are almost identical and are hard to choose between.

There’s a Holy Roller (Jocasta), The Fashionista (Victoria) and Oktober Fist (Nicole). She finally gets it. Caleb is up next and wants to make sure Jocasta doesn’t win so he can protect Zach. There’s Beast Mode Cowboy (him), Femme Fatale (Amber) and The Crustacean (Hayden). He finally gets his done and Victoria is next. She keeps at it, but is tired and scared of heights.

She is getting worse and keeps rearranging instead of substituting and her time runs out so she’s out of it. Jocasta is up next. She’s happy with her super hero alter-ego. She cruises around and is down to just one error. She notices she messed up The Fashionista comic and then she’s done as well. Next up is Christine and she knows the stakes are high. She wants Zach out of there.

Christine is done next and it’s Zach’s turn. He’s happy to see the Zach Attack comic. He says he feels like a super hero. He has two wrong on his first go. Not too shabby. He keeps getting the same two wrong. He’s getting mad. He throws one card and breaks something. He’s confused and frustrated. He heads back up the zip line again and realizes he had two backwards. He’s done.

Zach thinks he’s ruined his chances of winning POV and calls himself an idiot for all his mistakes from getting Nicole to put him up on the block, screwing up the challenge and now this. The others come out to look at the comics. Frankie reveals results. Nicole took over 12 minutes. Caleb took over 15 minutes. Victoria flopped. Jocasta took more than 14 minutes. Nicole is still in the lead.

Christine took less than 12 minutes and moves into the lead by 30 seconds. Zach is last and his time is 26 minutes. This gives Christine the golden power of veto. Everyone acts happy but they’re really not. Christine wants to leverage this to send Zach home. Zach knows this could be the worst thing for him and knows Christine is the only person that can help him.

Victoria and Caleb are ready to cut the cord between them. They call everyone together and announce the Adam and Eve gig is over and cut their vine. Nicole is in bed cuddling with Hayden. She tells him he’s a good cuddler. He says he can’t believe what Christine said about him and Victoria. He calls her a squid and Nicole says she really thought she could trust Christine.

Nicole says if Christine is dumb enough to use the POV, she’s going to put Frankie up. Hayden is excited because either Frankie or Zach are going home. Christine goes to stare at the wall of players and puts on her medal. She looks at Zach’s pic. He thinks it’s in her best interest to keep him and get Jocasta out of the game. Jocasta isn’t sure what Christine is going to do.

Jocasta thinks if she doesn’t use it, it will be better for her. Christine calls for the veto meeting. Everyone comes in. Christine gives them a chance to ask why she should use POV on him. Zach starts telling a joke about a grasshopper walking into a bar. It’s a dumb joke. That’s all he says. Everyone laughs. Jocasta appeals to her to save her but says no hard feelings either way.

Christine says she decided not to use the POV. Zach is floored as she adjourns the veto meeting and puts the medal back in the box. Christine thinks it was just too risky because she didn’t want two Detonators on the block and is going to try and get the alliance to vote for him. Nicole isn’t pleased but is okay with voting out Zach.

Derrick also thinks Zach is likely going home. Zach says he just needs to lie low for the next week. We’ll have a double eviction tomorrow night and see what happens on #BB16.