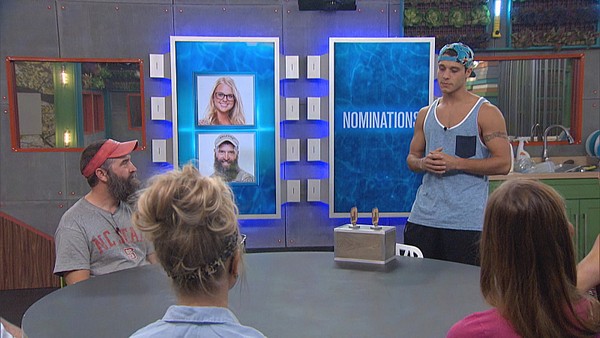 Tonight on CBS BIG BROTHER returns for an all new episode in their 16th season. On tonight’s episode the Power of Veto competition is held.  Once the competition is held we will see the veto ceremony and find out if the veto is used to take someone off the block.

On the last episode, only one HOH was crowned  in competition that was a very close call between Donnie and Cody, in the end, Cody won the HOH and the power to put two house guests up for elimination. During the nomination ceremony, both Nicole (she returned to the Big Brother house from the jury house in a surprise twist) and Donny were put up for elimination. If you cannot wait until the episode airs we had already spoiled it for you. Did you watch the last episode? If you missed it we recapped it all, right here for you.

On tonight’s episode the house guests will be going head to head, in order to fight for the Power of Veto. If you really must know what is going to happen tonight we have already spoiled the episode for you, you can check it all out HERE.

Big Brother 2014 airs tonight at 9pm with another great episode, we will be live blogging the show with all the up-to-the-minute details so make sure to come back to Celeb Dirty Laundry and watch the show with us. Can’t wait to see how all the drama plays out, how about you? Are you excited about Big Brother?

It’s day 64 and Cody is talking about how he has to get Donny out and how he had to put Nicole on the block to appease his alliance. Donny isn’t surprised that he was nominated and knows he needs to win veto or go home. Nicole says it’s de ja vu all over again. Caleb says Donny is a genius and is going to try and get them all to turn on each other. Caleb says some crazy stuff about how Donny is like rain main and how his eyes are always moving because he’s always thinking. He says it may be gangrene (WTF?) and then says it may be military intelligence and that Donny has an IQ of 150.

Derrick goes to talk to Cody about who they should put up if Donny comes down. They discuss putting Frankie up. He says it’s not what should be done even though it’s a big move. Derrick says Nicole and Donny either one will put him up if they come off the block. Donny finds a Team America challenge envelope that says the mission is to create and carry out their own mission that must impress voters. It must be done by the end of the veto meeting.

Donny says he thinks the mission should be to keep all the Team America members together. Donny explains the mission to Derrick. Derrick says they have to get Frankie on board. Donny tells Frankie about the mission and how he thinks they should carry it out. Frankie says it’s interesting and cool. Donny thinks Team America is his only hope and is pushing hard.

Victoria is wearing her sunglasses because her face is all swollen because her wisdom teeth are coming in. Christine says her head looks like a soccer ball. She says it’s so embarrassing. Victoria is called to the diary room. Caleb talks about how jacked her face is as soon as she leaves the room. Derrick says he doesn’t think she can compete.

Later she’s in the bathroom and isn’t even talking she’s hurting so much. Nicole hears a noise and finds her passed out in the toilet. She calls Derrick and says they need help. Derrick calls for a medic and tells her to keep her eyes open. He puts her head on a pillow. The medic comes in and everyone gathers round. Nicole is a nurse but she says she doesn’t like taking care of people she knows.

Victoria says she’s sweaty everywhere. They start her on oxygen and then take her into the diary room. Donny runs ahead opening doors and says he’s saying a prayer for her. Derrick helps carry her in. They lay her down and then the others step out of the room. She sits up and is in pain. They discuss how awful it would be to be in the house and dealing with pain like that.

Victoria finally comes back out of the diary room and says she’s doing better and just needs some medication. Frankie and Derrick talk about the Team America mission and Derrick is on the fence about that idea. Frankie says he won’t throw it and says America wouldn’t ever come up with a “save Donny” mission. Derrick thinks they should do something funny like last time.

Frankie says he’ll figure out something fun. Cody calls everyone for the veto competition. He says six people will play. The HOH, nominees and three others. Cody draws Christine’s name. Nicole draws Derrick. Donny draws Frankie. Donny isn’t happy about that but Cody is happy that there are four alliance members playing for POV.

Donny comes to talk to Derrick about the Team America mission. Derrick says he’s torn and Donny says he’s never done anything against him. Donny says people are paranoid and he hasn’t done anything against him and Derrick says people are scared because he’s smart and has heart and if he’s in the final two, he’ll get the money. Frankie comes in and says they need to do something fun and simple. He says he doesn’t think it’s as simple as just voting to save Donny.

Frankie knows the whole house wants Donny gone and it would ruin their games. Donny says they can just send Nicole home before him first. Frankie says or they can put a play on to amuse everyone and earn $5k. Derrick says him going home is not a done deal but he wants the $5,000. Donny asks what kind of play and they start discussing it.

Caleb calls everyone to the veto competition. Christine wonders if it’s the stay or fold game and tells Frankie they may be able to throw it to someone who’s good with numbers. She tells Cody and Derrick they can throw it to Frankie and they both agree. Caleb says this challenge is based on the new show Scorpion about prodigies.

We see rubber duckies in pools and the house guests have to show they have the smarts to be on the Scorpion team. It’s the counting challenge. They have a few moments to look around at everything and then answer questions. They have to earn three clearance badges. The winner gets to pick two people to watch an advanced screening of the show. Donny wants to see the show.

The challenge starts. Round one asks how many pinwheels are on display. Frankie says he’s amazing at numbers. Donny wins the first challenge and Frankie is out. Woo-hoo. Christine is disappointed in him. Derrick says Donny is a genius and they suck at trying to manipulate these challenges. Next up is a wall of espresso cups. Everyone but Cody folds and he wins. Then the next round the same thing happens again. Cody has two and Donny has one.

Shocker – in the next round Nicole and Donny fold like idiots and hand it to Cody on a silver platter. Cody gets to go watch Scorpion but nicely chooses his two nominees to go watch the show with him. That was the biggest bonehead move ever. I’m stunned. Can they not count to three??? Cody calls the other two to come with him for the screening.

They head upstairs to watch the show in his HOH room. There is pizza, beer and snacks. This is great since he also made them have nots and they’ve been on slop too. They start the show. Nicole says it’s a super cool show and says smart people are so attractive. Cody is on the edge of his seat and Donny loved it too. They thank him for inviting them along.

Frankie tells Cody they should plan an activity and suggests they put on a show. Christine agrees. Cody agrees too. Victoria puts make up on Frankie. They put on a show called house swap and they will each be playing a character who is already voted out. Frankie plays Joey. Donny does Devin and makes muscles. Caleb does Hayden. Nicole is annoyed with his impression.

Derrick does Jocasta. Victoria does Amber. Frankie calls it BB Broadway Houseswap. Donny says he thinks America would have liked his better. Derrick says he can’t get Cody alone because of Frankie, Christine and Caleb. He finally gets him alone. Cody says he can use the veto and get Frankie out. He says he doesn’t trust Christine either.

Cody says it’s kill or be killed and he doesn’t want to miss a big shot. Derrick says they either have to take Frankie or Christine out. We get to vote for the Team America challenge. You can vote at CBS.com/bigbrother to say if you think they deserve the $5,000 each for the mission they had to pick on their own.

Cody looks at the photos and puts on the veto necklace and weighs his options. He calls everyone for the veto meeting. He tells Donny to make his plea first. Donny congratulates him on winning POV and says if it’s not in his game plan to use it on him, he respects it. Nicole says she’s happy to be back in the house and would love him to use it on her, but doesn’t expect it.

Cody wimps out, doesn’t make his big move and doesn’t use the power of veto. Derrick gives him a look that I can’t tell if it’s a glare or not. Cody is too scared not to vote Donny out like everyone wants. Nicole says she loves Donny but has to keep the target on him to save herself and just go with the flow.