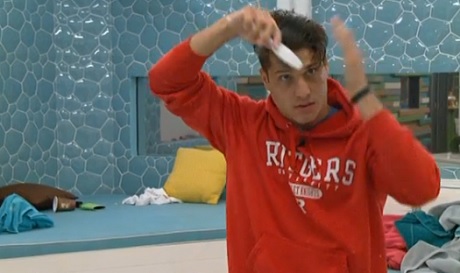 Big Brother season 16 is coming to an end on Wednesday, September 24th when the winner of the CBS summer reality series will be crowned. One of the final three BB16 players: Victoria, Derrick, and Cody, will walk away with a half a million dollar prize. The final three have to compete in a final Head of Household competition, which is divided in to three rounds. The final HOH winner is guaranteed a spot in the final two, and has to choose another player to join him or her in front of a jury of evicted houseguests, who will then vote to determine the ultimate winner.

According to Big Brother 16 spoilers from the live feeds, the final three have already competed in Round #1 and Round #2 of the final Head of Household competition. The first round aired on the live feeds and was an endurance competition, Victoria, Derrick, and Cody had to hold on to hang-gliders in the backyard of the BB16 house, Cody was the final player hanging, and crowned the winner.

Big Brother spoilers on the live feeds have revealed that Victoria and Derrick went head to head in Round #2 of the final HOH competition. Although we have no idea what the competition consisted of, the houseguests have revealed that Derrick beat Victoria and he even bragged on the live feeds that he “smoked her.” So, Derrick and Cody will be competing against each other in Round #3 of the final HOH competition to determine the winner.

Now, this is where it gets interesting. Derrick and Cody have had a final two alliance since day one, but unbeknownst to Cody, Derrick also has a final two alliance with Victoria. Seeing as how Derrick and Cody are supposedly working together, it really shouldn’t matter which one of them wins Round #3 because they have agreed to take each other to the final two. But, both players would be foolish to take each other and not Victoria to the final two. However, at the end of the day, if they do take Victoria the jury could vote to give her the half a million dollars because they all feel that Derrick or Cody betrayed them at some point.

So, Big Brother fans, who do you think is going to win Big Brother 16? Could Victoria, the player who has won literally one competition the entire season (and that win was handed to her), actually walk away with the grand prize? Will Derrick and Cody stay true to each other and their final two alliance, or will the winner of the final HOH competition decide to take Victoria to the end with them because they think they have a better chance of beating her at the jury? Let us know what you think in the comments below and don’t forget to check CDL for all of your Big Brother 16 spoilers and recaps.

Update: we are live blogging the show for you so just CLICK HERE to get the latest finale results!  Cody is final HOH and takes Derrick with him to the Final 2. Derrick won this season – no surprise! Cody really should have taken Victoria with him to the final. On a brighter note, Donny won America’s Favorite Houseguest – okay, one for the good guys!