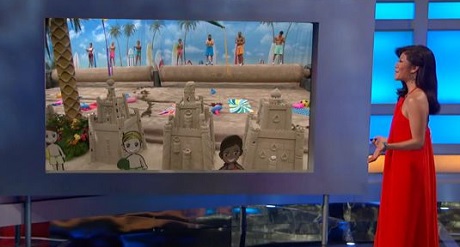 The highly anticipated two-night premiere of Big Brother 16 kicks off on June 25th on CBS. Die hard Big brother fans are on the edge of their seats waiting for the BB16 kick-off — and the network has decided to release a spoiler video to make the wait just a little less painful. A 48-second clip has surfaced on YouTube of the very first Big Brother 16 HOH competition.

Big Brother 16 spoilers released earlier this week revealed a game-changing twist will take place in the Big Brother house. There will be two HOH’s every week and each HOH will nominate two players for eviction, at the end of the week the two HOH’s will compete against each other to determine who remains HOH and whose eliminations are taken down.

According to BB16 spoilers, eight players will move in to the house on the 25th and compete for HOH. And, on the second night of the Big Brother 16 premiere eight more house guests will move in and compete for another HOH competition. The spoiler video released by Big Brother appears to be of the HOH competition on the first night of the premiere, and the eight house guests competing for the title are Joey, Cody, Frankie, Devin, Paola, Donny, Amber, and Nicole.

In the spoiler video, the houseguests appear to be playing a competition called “Go Fly A Kite,” and the entire backyard of the Big Brother house has been transformed into a beach, complete with sand. Each houseguest must hold onto their kite string while balancing on a rotating beam. If they fall off the beam or let go of their kite string, they are out of the competition.

Check out the sneak peek video and let us know what you think. The first HOH competition looks like it requires a lot of stamina and athletic ability; it’s too soon to tell which one of those eight players will excel or flop at an athletic competition. Don’t forget to check CDL daily for all of your BB 16 spoilers and recaps.