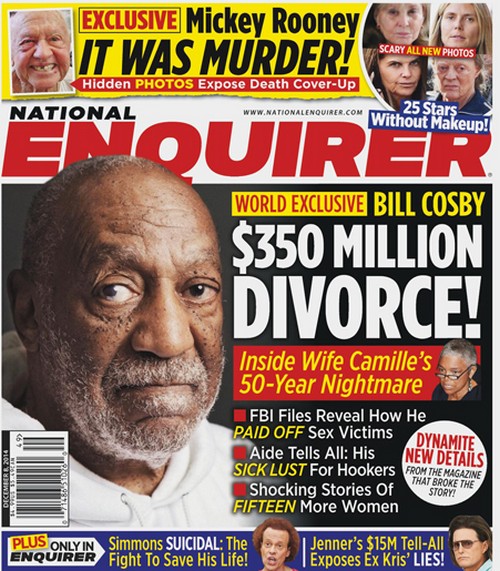 Bill Cosby’s poor, long-suffering wife Camille Cosby has been married to him for fifty years, but I don’t think she ever thought of such a nightmare was waiting for her down the road. I don’t want to say that she had no clue about her husband’s serial rapist behavior, but to this extent? It’s doubtful that Camille Cosby had any idea that her husband was such a closeted rapist, and even if she did, the extent to which Bill Cosby raped all those women was probably hidden from her. And now that the secret’s finally coming out, Camille is asking for a $350 million divorce.

At this point, the couple – Bill Cosby and Camille Cosby – had already survived one extramarital affair and the death of a son, not to mention that Bill Cosby had fathered a love child with yet another woman.

A source tells the National Enquirer, “There’s only so much more she can take. With one woman after another now coming forward, Bill’s image is being destroyed, and all their years of hard work for charity and philanthropy are being tarnished. I know CaF mille is feeling humiliated by all this – and, even worse, she’s come under personal attack.”

Many people are having a hard time believing that the wife didn’t know anything about this, instead preferring to keep quiet as opposed to ruining her husband’s reputation even further. However, you only need to speak to her or listen to her rant about Bill Cosby to know the truth – Camille Cosby hates his guts. What are your thoughts on the developing Bill Cosby rape scandal stories?

And lest you think that the Enquirer is all about Bill Cosby these days, you’d be wrong: there’s also a featured story about how Bruce Jenner plans to expose Kris Jenner in his $15 million tell-all book. About time, I say.