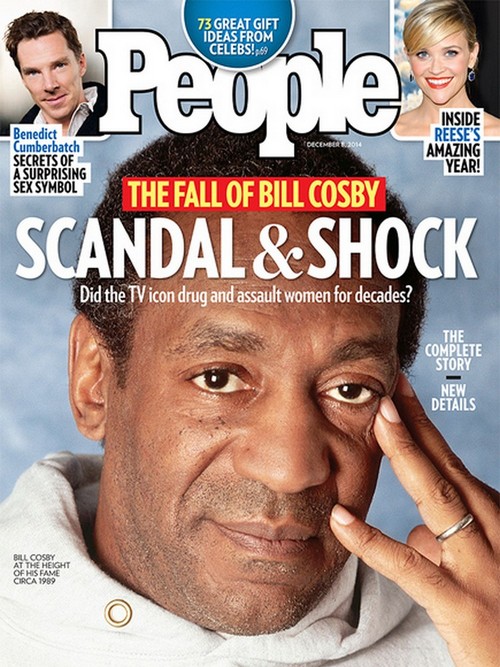 Legendary actor and comedian Bill Cosby is featured on the front cover of the latest edition of “People” magazine. Inside, the magazine details the rise and fall of a comic legend.

The “Cosby Show” star and peddler of Jello pudding pops is at the center of a scandal involving sixteen women who have come forward to claim that he raped them. Janice Dickinson claimed in a 2006 interview with Howard Stern that her publisher wouldn’t allow her to go anywhere near Cosby and his ilk because she didn’t have the shekels needed to go head-to-head with his lawyers. However, at the time she did call Cosby a bad man.

In an interview about Cosby, she delve further into details of Cosby’s patchwork robe and how she was drugged and raped by the comedian. Now, other women have since come forward with similar accounts of his actions, leading us to believe that where there is smoke, there is fire.

Cosby’s accusers are coming out in droves and they all have basically the same stories. He allegedly drugged and raped these women, despite his attorney trying to call BS on the accusations. It’s hard to believe that sixteen women are making up “fantastical” stories of how this sleazebag drugged them and subsequently raped them. Now, I know that Janice Dickinson isn’t exactly a saint, but she came out with her allegations before any of the other women began making a fuss this year. Her interview with Stern was from 2006 – which, in my eyes, lends credence to her story.

“People” has interviewed roughly eight of Cosby’s accusers in a detailed report in their current issue. His former publicist Joan Tarshis was even a victim on the set of “The Bill Cosby Show” in 1969. She said, “There was no word for what happened to me. In 1969, rape meant you were walking in an alleyway and someone pulls a knife. It was like, ‘Oh my God. I’m saying this out loud and nobody’s blaming me.'”

Cosby’s alleged victim Louisa Moritz is looking to assemble nine other women in a class action lawsuit against the actor and comedian. Moritz claims that Cosby stuck his penis in her mouth in her dressing room before an appearance on “The Tonight Show” in 1971.

Moritz is currently reaching out to other victims to file the lawsuit, despite the statute of limitations having run out on her claims.

What do you think of this whole scandal? Hit the comments and have your say!