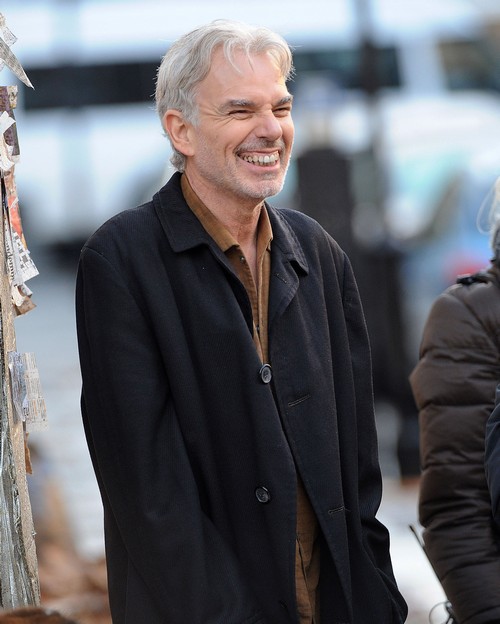 Angelina Jolie and Brad Pitt married in France last weekend and we wonder about Billy Bob Thornton’s reaction since relationship with Angelina Jolie was pretty epic. How do we expect Billy Bob Thornton to react to Brad Pitt and Angelina Jolie finally getting Married? Well, who can forget Angie and Billy Bob wearing vials of each others’ blood around their necks or discussing having sex in the car while on the way to a red carpet event. Their marriage was probably destined to fail but after splitting up back in 2003 Angie and Billy Bob have always maintained a real friendship thanks to the deep connection that they share.

Billy Bob has been dating Connie Angland since breaking things off with Angie and now seems to think that the secret to his decade long romance is not making it official. Billy Bob recently told Huffington Post that once he swaps vows it’s like he turns into a caged animal and everything changes for him because of the assumed lack of freedom. He thinks that the multitude of ties that he shares with Connie now is enough to make him want to stay loyal and invested in their family.

While Billy Bob admits to not being marriage material he no doubt is thrilled to see Angelina Jolie finally marry Brad Pitt. Their relationship has already proven to be be capable of going the distance and after six kids and almost a full decade together it makes sense for Brad and Angie to complete the circle and make it legal. Very few people know Angelina Jolie better than Billy Bob Thornton and she probably also has shared that caged feeling in regards to marriage in the past. To decide to take that plunge again now means that she is in a different place and ultimately Billy Bob wants to see his ex-wife happy.

Were you surprised that Angelina Jolie and Brad Pitt announced that they got married last Saturday at Chateau Miraval in France? Do you think maybe somewhere down the line Billy Bob Thornton will decide to marry Connie Angland as well? Tell us your thoughts in the comments below!