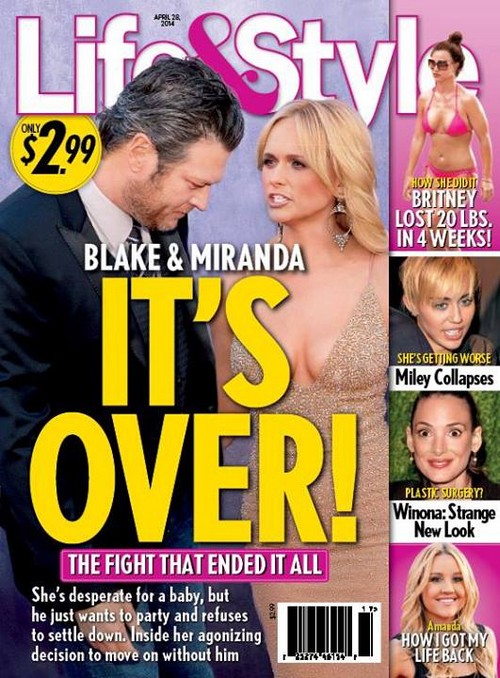 If ever the deck seemed to be stacked against a couple it would have to be Miranda Lambert and Blake Shelton. There’s that old saying that how you get your man is how you’ll lose him and it seems that girlfriend has spent the past two years really learning this concept the hard way. The couple has spent the majority of their marriage apart, usually because of work but while away there are always those rumors about Blake playing around. He has been linked to a steady stream of younger women, leading Miranda to babble to the press about how she trusts her husband – because she checks up on him constantly!

After deciding that she would lose 30 pounds in order to compete with her husbands’ string of side chicks and grabbing his attention for a brief while it seems that the fighting between these two has started all over again. According to the April 28th print edition of Life & Style magazine Blake and Miranda’s most recent blowout is likely their final one. Supposedly Blake had been pressuring Miranda to have a baby and now that she is finally ready he has backed away from the idea. Now that she is ready to give him what he claimed to want, Blake panicked at the thought of being tied down by a kid when what he really wants to do is party.

Also in the latest issue of Life & Style you can catch up on the latest developments in Miley Cyrus’ messy Bangerz tour. Three dates have now been canceled and rumor has it all of these supposed illnesses are being brought on by Miley’s heavy duty partying and deciding to turn to harder drugs to help her deal with the death of her beloved dog. Is it time for Miley to seriously consider rehab before it costs her more than just a few missed concert dates? Tell us your thoughts in the comments below!