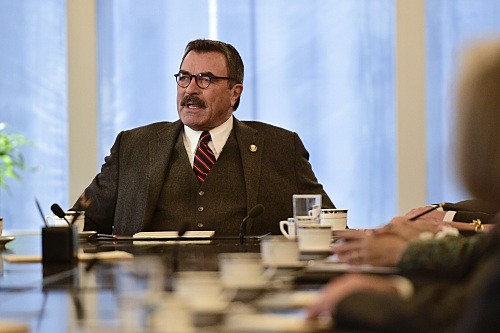 Tonight on CBS Blue Bloods continues with an all new Friday December 12, season 5 episode 9 called, “Under the Gun” and we have your weekly recap below. On tonight’s episode three community leaders are killed in apparent hate crimes, and Danny [Donnie Wahlberg] and Baez investigate as Frank [Tom Selleck] meets with folks who want to ensure the gravity of these crimes is not ignored. Meanwhile, Linda [Amy Carlson] wants to protect herself with a gun after getting mugged.

On the last episode, Frank faced public backlash after an officer’s body camera malfunctioned during an altercation with a civilian. Meanwhile, Danny and Baez struggled to protect an informant after the U.S. Marshall’s Service decided not to put him in Witness Protection, and Erin investigates an old friend’s daughter’s claim of rape at a prestigious university. Did you watch the last episode? If you missed it, we have a full and detailed recap right here for you.

On tonight’s episode as per the CBS synopsis, “as Danny and Baez investigate the murders of three prominent community leaders who appear to be the casualties of hate crimes, Frank meets with a group who wants to make sure these incidents are not taken lightly. Meanwhile, after Linda is mugged, she decides she wants to carry a gun, even against Danny’s wishes.”

Blue Bloods “Under the Gun” airs tonight at 10:00 pm ET and we will be live blogging all the details. So don’t forget to come back and refresh your screen often for live updates. While you wait for the recap, check out a sneak peek of tonight’s episode below!

A man was shot coming out of his synagogue. But this man wasn’t just any old man. He was Judge Kleiner and he was notoriously the strictest judge in all of the Bronx. So immediately Danny and Baez knew they were going to have a rough time with this case. Though they had no idea had big the case was going to get before long.

A second man, again Jewish, was murdered by a motorcyclist. He was targeted outside of his law firm and because of the ethnicity of both victims – the case is starting to look like a hate crime. And as everyone knows – Frank as the acting commissioner is the one that has to address the press in situations like that.

But a judge and a lawyer might have crossed paths in more than just a synagogue. So, as Frank’s office is looking for a way to address the murders without causing strife within community, Danny is continuing to investigate the case as something possibly involving one of both men’s cases.

So far Danny hasn’t been able to find anything. Yet, it seems like no Reagan is winning right about now. Erin’s case, which in all honesty depends on one vital piece of evidence, is falling apart. The gun the officer had collected from the suspect was a match to the same gun used to kill three victims. And when it came time to present said evidence – one of Erin’s own people betrayed her by switching out the gun with a decoy.

There’s just no other explanation for it what happened. Someone must have betrayed her because only the ADAs were allowed near her key card. And her key card was used a second time without Erin’s knowledge.

Erin was left so upset by the situation that she created a sting to draw out the culprit.

And as for Danny’s case, a third Jewish victim was hit and it was no longer possible to ignore the fact these crimes were hate crimes. But Danny’s mind hasn’t really been on the case lately. His wife was mugged while she was working on one of those special medical busses that travels to “rough” neighborhoods and when Danny had found out about it he tried to order her not to work the bus anymore.

Linda didn’t take too well to being ordered so she told Danny to mind his own business. Though she did do something he could either appreciate or what will make him regret trying to ordering her.

Linda got herself a gun. And to expedite things she even used her father-in-law’s good name. So eventually Frank found out about what she did and he chose to remain quiet about it. Erin and Jamie had also learned what Linda did but Frank had advised them not to say anything. He said it wasn’t any of their business to interfere with how Linda chooses to protect herself.

However, he later changed his stance, when several prominent Jewish men and women bought into private security for themselves around the city. Frank still hadn’t described the murders as hate crimes and that ended up frustrating people who felt like they were at risk. So these same people came together and hired over 500 members of private security.

They did this when Frank refused to offer them extra protection and they even took out space in a magazine to describe why they had taken such an action.

But none of that mattered to Frank. He felt like that much private security sent a message. And that message was the NYPD can’t protect us. So then Frank tried to get his family to see his point of view (particularly as his own team were agreeing with him this time) and surprisingly they all sided against him as well.

Frank’s family could understand perfectly why the Jewish community felt like that and they equated what they did with the right to bear arms.

Then something happened that changed everything. Danny and Baez found their shooter and as it turns out he wasn’t going after people because of their ethnicity. It seems he targeted the judge, the lawyer, and the doctor for all being involved in the same case. The killer has lost his wife because of hospital error and yet no charges were ever filled and it was only his legal fees that were paid for. So that was the shooter’s motive and once Danny learned about it – he and his partner realized they was one person left on their killer’s hit list.

A nurse had that had also been on his wife’s case was used as a witness during the trial. And she was what they called a bullet proof witness. She helped tied up the case in favor for the hospital.
Yet, it looked like she didn’t need anyone’s help. When Danny and Baez arrived, they quickly found out that the nurse was easily capable of taking care of herself. She had shot at the motorcyclist after he tried to target her and she had solely taken him down.

And that got Danny thinking. He returned home after booking their shooter and he was going to apologize to his wife, another nurse, when she shocked him by handing over her gun.

Linda found out that she didn’t have in her to use the gun so she asked Danny to get rid of it and she told him to never forbid her doing anything ever again. And because Danny realized how far he pushed his wife into nearly doing something – he promised he wouldn’t issue out another demand.

And as for Erin, she managed to talk to the assistant that had betrayed her and made the other woman change her mind about hiding the gun for an upcoming trial.

Guns is just something no one should be playing around!