The Bold and the Beautiful Spoilers: Will Hope Choose Liam Over Wyatt at Dinner – Love Triangle Broken? 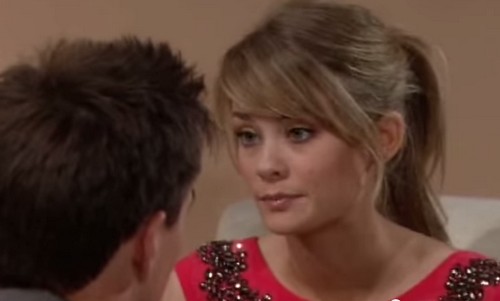 Love triangles are nothing new on soap operas, but the Hope, Liam, and Wyatt triangle on The Bold and the Beautiful has gone on long enough. According to Bold and the Beautiful spoilers this week on B&B may actually be the final week that fans have to endure the never-ending saga though, because Liam has given Hope an ultimatum and finally put his foot down.

Liam and Hope were a Bold and the Beautiful power couple and at one point they seemed unbreakable. However, any soap opera fan can tell you no relationship lasts forever in soap land, and like hundreds of soap couples before them Liam and Hope eventually broke up. And, Hope wound up in a relationship with Liam’s long-lost half-brother Wyatt.

Wyatt and Hope were in a good place with their relationship, but that never stopped Liam from pining away after her and reminding her that he still wanted to be with her. Just when we thought that Hope was immune to Liam’s advances and was happy with Wyatt, she had a pregnancy scare that put everything into perspective for her. The idea of making her relationship with Wyatt permanent by having a child with him caused her to realize she may still have feelings for Liam after all of this time.

Liam invited Hope over for a romantic dinner and told her that if she doesn’t show up then he is done trying to win her over and he will officially move on. If Hope does show up for the dinner, then Liam will take it as a sign that there is still a chance that she wants to be with him.

Now it is just a waiting game to see if Hope shows up for dinner with Liam. Do you think she will choose him or her current boyfriend Wyatt? If you were in Hope’s shoes who would you choose? Let us know in the comment section below and don’t forget to check CDL tomorrow for more Bold and the Beautiful spoilers.

Update: It seems the vast majority of fans want Hope to choose Liam over cocky Wyatt. However one fan’s voice on the Soap Opera Spy FB page hates the entire situation and wants both brothers banished:

Why would Hope want to be with either one with the way they are acting. They are so desperate they will let her sleep with two people and keep giving her time to choose? It’s getting ridiculous if you think about it. No real man would allow someone to sleep with him and his brother while she decides. I always like hope but she’s acting like a ho. Just because she is an honest ho still makes her one!

I think this is a good point – after all is Hope some prize to be won? It’s all a bit primitive and dehumanizing.