Bold and the Beautiful Spoilers: Quinn Adds Aly To Her Hit List 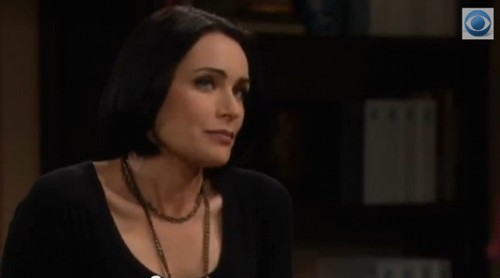 The Bold and the Beautiful is about to up the ante in so many ways, not least when it comes to Aly’s future on the show. We already saw Aly turning violent and obsessive when it came to Hope, and it’s obvious that her obsession with Hope was making her crazy with a capital C. While she’s seemed to have underlying mental issues all this time [as hinted at by people close to her], they’ve really kicked into gear with her fight with Wyatt and her overbearing behavior towards Hope.

But alas, things are about to get much, much uglier with Aly as Quinn also adds her onto her hit list. Basically, Aly doesn’t like Hope’s involvement with Wyatt – but since Quinn is Wyatt’s mother, she’s not going to take that lying down. Quinn’s #1 goal is to keep all the Forresters happy, and she’s not going to let Aly get in the way of that happiness.

Rena Sofer [who plays Quinn] recently revealed, “I don’t think Quinn sees Aly as any sort of threat other than she’s a Forrester family member and Quinn’s motto is ‘Let’s keep all the Forresters happy.'”

However, Sofer also added that things are about to get crazy with the Forrester family drama, explaining, “Quinn thinks she can handle Aly – up until Aly says something that would take this out of Quinn’s control, and when that moment happens, that’s where Quinn loses it. Aly crosses a line that’s not crossable for Quinn, and when that happens, that’s when the claws come out. As the situation plays out, Quinn is going to have to lick her wounds and regroup.”

Basically, shit’s about to go down, and Quinn and Aly are going to kickstart their feud of the century soon. What line do you guys think Aly crosses that makes Quinn so angry? Will she hurt Wyatt? Let us know your thoughts in the comments.