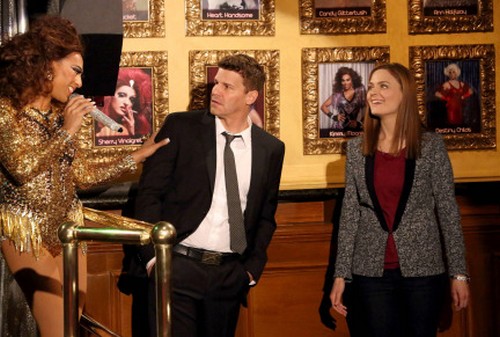 Bones returns tonight with a new episode called, “The Drama in the Queen.” On tonight’s episode the remains of a swim coach at a community college are found at the bottom of a well, and the investigation reveals he may have been having an affair. Meanwhile, Booth prepares to testify before a Congressional subcommittee, so his place in the current case is filled by Sweets, who is smitten with a new intern at the Jeffersonian.

On last week’s episode the Jeffersonian team investigated the death of Stephanie McNamara (Kelly Rutherford), the daughter of a wealthy family, whose remained are found in a national park. In case you forgot, Stephanie was in “The Ghost in the Killer,” and though her brother’s death looked like a suicide, Brennan was convinced it was the Ghost Killer. When the team dug deeper into the circumstances surrounding Stephanie’s death, clues from the case lead them to believe she could be yet another victim of the Ghost Killer, with a surprising connection to one of the previous victims.  Did you watch last week’s episode?  If you missed it we have a full and detailed recap, right here for you.

On tonight’s episode the Jeffersonian team investigates the death of Stephanie McNamara (Kelly Rutherford), the daughter of a wealthy family, whose remains are found in a national park. In case you forgot, Stephanie was in “The Ghost in the Killer,” and though her brother’s death looked like a suicide, Brennan was convinced it was the Ghost Killer. When the team digs deeper into the circumstances surrounding Stephanie’s death, clues from the case lead them to believe she could be yet another victim of the Ghost Killer, with a surprising connection to one of the previous victims.

Tonight’s episode of Bones kicks off with a Mom trying to convince her daughter to climb down in a well so that she can call the cops and stage a disappearance. She promises her daughter that if she goes down in the well they will be famous and get lots of money. The daughter is still skeptical so her Mom climbs down a rope into the well to show her it is nothing to be scared of. Once she makes it to the bottom she begins screaming bloody murder because there is a skeleton in the well, her daughter laughs and throws the rope in so that her Mom can’t climb out, and runs off.

Brennan wakes up and Booth is preparing to testify before the Congressional subcommittee. He reveals to Brennan that he is going to have Sweets cover for him for the next couple of weeks. She isn’t thrilled about the idea, but she receives a phone call regarding remains found in a well so she heads off to work.

Brennan and Sweets head down into the well to search for evidence. After checking out the skeleton she comes to the conclusion the remains belong to a man in his mid-forties. While Brennan is down in the well checking out the remains, Sweets is up above analyzing the drag marks and “talking to the locals.”

They take the remains back to the lab and begin analyzing them. After further investigation Brennan and her team come to the conclusion that the victim is an athlete, most likely a swimmer. They get a hit off from missing persons, the victim is Bryan Thomas, age 43, and the head swim coach at a community college. Booth sends Sweets to talk to Bryan’s wife.

Sweets sits down with Mrs. Thomas to discuss the last time she seen him. She has no idea, she is a nurse and Bryan stayed late at the pool at school. She admits their marriage was struggling, but she is confident they could have saved it.

Booth reports to Sweets that the tox labs came back and Thomas wasn’t on any drugs or drinking when he died. Sweets has done some digging and things that the Coach’s death may be related to a hazing incident on his team, two of his players wound up in the hospital. Bryan turned in one of his players named Avery to the police for the hazing.

Sweets and Brennan head to the pool to talk to Avery. Avery and his friends reveal that the last time they seen their Coach was on Wednesday night, he left practice and told them to “lock up.” They think that the cops should talk to his assistant coach Gabby, “it seemed like they were sleeping together.”

They bring Gabby in to question her, and she adamantly denies having an affair with Coach Thomas. However, she knows that Thomas was having an affair-just not with her. She had no idea who he was cheating on his life with.

Brennan’s intern Warren soaked all of Coach’s bones in tubs of pineapple juice, she wasn’t sure it would work, but it did. She managed to clean up all of the skeleton and realizes that he has several shattered bones. Brennan comes in and is confused because he has bones in his feet that were damaged long before his death, and were similar to those that women receive when they wear high-heels.

Brennan and Booth head to a restaurant where Coach Thomas charged his credit card every Wednesday night. No one in the restaurant recognizes Thomas in his pictures. They head out in the street and realize the restaurant is next door to a club called “Madame’s Apple.” Once they are inside they realize it is a club for drag-queens, and there is a photo of Thomas dressed like a woman hanging on the wall. Coach Thomas wasn’t having an affair, he was living a secret life as a drag-queen. They sit down with one of Thomas’s fellow drag queens and learned that he goes by the name of “Jenny” and he got in a fight in the parking lot before one of his shows, but he never told anyone who he got in a fight with.

Brennan’s team pulls security footage from the night that Coach’s friends said he got in a fight. Sure enough there is a clip of him fighting with a man, the assailant hopped in a plumbing truck after ward, they used his lisence plates to track him down. The man from the clip is named Joe, and according to him he “had a thing” with Jenny. They were fighting because he accused Coach/Jenny of stealing his credit card information from his phone and making strange purchases.

Brennan and her intern Warren have been tediously trying to figure out what the murder victim was. After testing all of the pipes in Joe’s plumbing truck they come to the conclusion that he wasn’t beaten, he was shot underwater so the bullet was slowed down and deformed before it reached him.

They head back to the college and begin investigating the pool. They find some bullet fragments in the drain of the pool and realize that the gun was fired under water. Brennan points out that a “gun shot under water would be deafening.” They remember one of the swimmers they interviewed at the pool, named Quinn had serious hearing loss and couldn’t comprehend what they were saying. They bring Quinn in for questioning and he confesses he killed Coach Thomas because he was going to report him to the Dean for cheating on his midterm.

Once the case is officially closed Brennan and Booth head out to dinner to celebrate, and Warren and Sweets head over to his apartment to do some celebrating of their own.