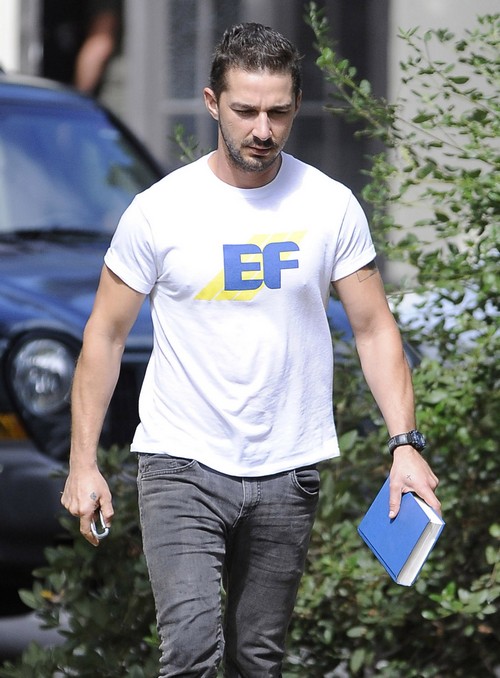 You don’t need to be a rocket scientist to discern that Shia LaBeouf is in trouble, whether it’s drugs, booze, or other health issues causing his unruly behavior – the troubled actor need rehab. However, Brad Pitt and Angelina Jolie are reportedly reaching out to Shia to support him as he tries to get better. Brad, as we know, worked with Shia on the set of Fury and although they didn’t get along very well, Brad clearly sympathizes with Shia’s struggle.

According to OK! Magazine, Brad and Angelina have decided to help Shia become sober – maybe they can find him a good rehab. Considering that Angelina has battled her own drug demons – some far worse than Shia’s – and managed to overcome them, she probably feels empathy for Shia as he goes through the same thing.

OK!’s source adds, “Brad and Angelina admire anyone who works to turn their life around, so they wanted to offer Shia a helping hand. They understand how hard it can be to kick demons. Brad’s a positive guy who tries to put good energy out there whenever he can. He loves a success story.”

Apparently, Brad and Angelina see a lot of their younger and more rebellious selves in Shia, even though they went through their issues with relatively more privacy than Shia. Granted, the media and the Internet didn’t exist in the same way back then, and Brad and Angelina were allowed some modicum of privacy to go through their rebellious phases and get over them. But with the 24/7 coverage of celebrities that exists nowadays, it will be doubly difficult for Shia to get back on track. Fortunately for him, he’s got two solid A-list celebrities on his side. If he’s serious about getting better, he couldn’t ask for more solid support than that.